THE LEGEND OF PAUL BUNYAN AND THE BLUE OX

Definition according to Wipipedia:
Paul Bunyan is a mythological lumberjack who is usually described as a giant as well as a lumberjack of unusual skill. The character was first documented in the work of U.S. journalist James McGillivray in 12910. In 1916, as part of an advertising campaign, advertisement writer William Laughead reworked the old logging tales into that of a giant lumberjack and gave birth to the modern Paul Bunyan a folklore character. 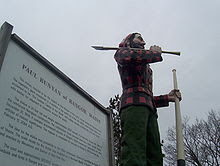 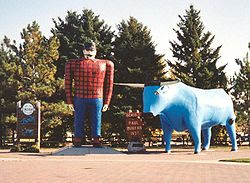 Paul Bunyan and Babe the Blue Ox statue in Bemidji, Minnesota
History
Apparently, French-Canadians originated the tales during the Papineau Rebellion of 1837, which is when they revolted against the young English queen This possibly explains Paul Bunyan’s last name. Boyenne is a colloquial French-Canadian expression which means “Good Grief” or “My Goodness.”

The Legend
At the mouth of the river in the Two Mountains area near Saint-Eustache, Quebec, loggers battled against the British. Among them was a bearded giant named Paul Bo0njean, his nickname – Bonyenne.

Another legend is that of a man living in Ottawa Valley (an actual person). His name – Big Joe Mufferaw or Joe Montferrand, Defender of the people.

The name was eventually Anglicised and the stories changed from generation to generation. Historians later say that the idea of Paul Bunyan with a blue ox was created in the twentieth century.

According to Wikipedia:
“Although it is claimed in some sources that ‘there is no…evidence of any Paul Bunyan story being told before…McGillivray’s story, The Round River Drive, published in 1910, ‘McGillivray had published some stories in the Oscoda, Michigan Press on August 10, 1906, and Governor of Michigan Jennifer M. Granholm proclaimed the centennial of that date as ‘Paul Bunyan Day.’

Bunyan and the Blue Ox
McGillivray’s story doesn’t portray Bunyan as a giant, nor is there mention of an ox. However, J. E. Rockwell, who wrote tales of Bunyan, referred to the blue ox in the February1910issue of The Outer’s Book. One tale indicates Bunyan to be eight feet tall and weighing three hundred pounds.

A historian, Carlton C. Ames, claimed (in 1940) that Bunyan was an invention of the twentieth century and not a nineteenth century folk hero. But William Laughead took the stories and reworked them into the modern character and sold the character to the Red River Lumber Company.

The Myths
According to Wikipedia, “Bunyan's birth was somewhat unusual, as are the births of many mythic heroes, as it took five storks to carry the infant (ordinarily, one stork could carry several babies and drop them off at their parents' homes). When he was old enough to clap and laugh, the vibration broke every window in the house. When he was seven months old, he sawed the legs off his parents' bed in the middle of the night.[11] Paul and Babe the Blue Ox, his companion, dug the Grand Canyon when he dragged his axe behind him. He created Mount Hood by piling rocks on top of his campfire to put it out.

Babe the Blue Ox, Bunyan's companion, was a massive creature with exceptional strength.[12] Most imagery of Bunyan shows Babe the Blue Ox as being of proportionate size (meaning massive compared to everything else). Among other subjects, a myth about the formation of Great Lakes was centered around Babe: Paul Bunyan needed to create a watering hole large enough for Babe to drink from.[8] There are also stories telling that the 10,000 Lakes of Minnesota were formed from the footprints of Paul and Babe while they wandered blindly in a deep blizzard. Daniel Boone and Davy Crockett were said to give Babe to Paul Bunyan, because they were all "woodsey" pioneer types. Paul Bunyan has dozens of towns vying to be considered his home. Several authors, including James Stevens and D. Laurence Rogers, have traced the tales to the exploits of French-Canadian lumberjack Fabian "Saginaw Joe" Fournier, 1845–1875. Fournier worked for the H. M. Loud Company in the Grayling, Michigan area, 1865–1875, where MacGillivray later worked and apparently picked up the stories.”

There are many more statues and parks devoted to Paul Bunyan and he continues to be the subject of advertisements. This summer, Minnesota Twins Baseball player, Jim Thome, played the role of Bunyan, together with the blue ox, with two other players commenting.

I found this history of Paul Bunyan interesting and would be interested in knowing how any of you would use Paul Bunyan as a hero in a romance or adventure novel.

Joan, fun information! Especially since I'm writing a book with a heroine who is a logger.

What a fun post. And learning that Bunyan means "Good grief" made me laugh. Thanks for sharing.

Wonderful post! I love Paul, and living in Minnesota, I've visited him all over the state. Though I didn't use Paul as the hero in my story, A Wife for Big John set in the early years of lumber boom in Minnesota, I did have a character tell the legend of Paul and Babe. Thanks for making me smile and bringing forth wonderful memories this morning!

I can remember reading a story about Paul Bunyan when I was a child. Larger than life!!!

I got a big dick!