This week in History 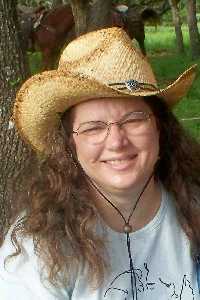 I usually wait until the last minute to do my blog. This week has been hectic, because my mother was hospitalized with pneumonia, so I let the blog get even further away from me.
Anyway, as I need to slap something together for today, I turned to a new book I got a few weeks ago, “365 Great Stories From History For Every Day of the Year.” Anyone who reads my blog knows about this book, as I’ve used it a couple of times for recent blogs. It has a ‘what happened today’ in the past for every day of the year.  I looked at the stuff that happened in the next few days….my gosh.  What was I doing during history class? How did I miss this stuff? 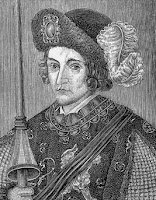 Today, September 19, 1356, Edward, The Black Prince of England defeated King Jean II of France in one of the early battles of the 100 Year War and took Jean prisoner for four years. (Edward is pictured left)
September 20th, the start of the Great Papal Schism began when a group of Cardinals, irritated at Pope Urban VI, who went back on his promise to move the Papal back to Avigon from Rome, held a conclave on September 20, 1378 and elected their own pope, Robert of Geneva, who named himself Pope Clement VII.  The schism lasted 38 years and 309 days and through several anti-popes, sometimes with 3 or 4 different people claiming to be the pope at the same time.  On July 26, 1417, Martin V became the sole Pope when the Council of Constance deposed of one of the pretenders, Benedict XIII. 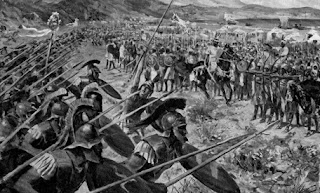 September 21, 490 b.c. is something about the Greeks annihilating the Persians at Marathon. Yes, you can see, I’m not particularly interested in that, so, please, look it up yourself at The ORB: On-line Reference Book for Medieval Studies  Just scroll down a bit to The Battle of Marathon – Preparations. 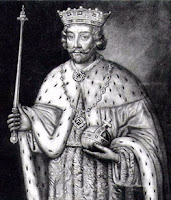 September 22nd, “The most barbarous royal murder in history.”  Frankly, I think it’s one of the most barbaric ever…royal or otherwise. Warning: This is graphic, so skip to the next entry if you’re squeamish.  Queen Isabella of England wasn’t too fond of her wimpish husband, King Edward II (pictured right). 365 Great Stories From History says he was “handsome, silly, weak and dominated by male favourites.” Isabella and her lover, Roger de Mortimer overthrew him and exiled him to Berkeley Castle in Gloucestershire.  They placed the king in a small, cold cell and fed him scraps, hoping he’d just shrivel up and die.  But Edward was stronger than they thought and he did not decline as they’d hope.  So, on the night of September 21, 1327, three of the queen’s henchmen entered his cell and held him down on his bed. They then “thrust a red-hot spit up through his anus, burning his internal organs.”  Okay, they may not have liked the man, but really, couldn’t they have just poisoned him?  At the time of his death, his son was 14.  Isabella served as regent until Edward III was of age, three years later.  He, unlike his father, wasn’t a wimp.  He sent his mother into exile and, as a traitor to the crown, had Mortimer hung, drawn and quartered. Okay, that may be just as barbaric and what they did to Edward II, but at least Mortimer deserved it!  Oh, btw, Edward II is the young prince depicted in BRAVEHEART, the one who's lover is thrown out the window by his father, Edward I.  Geez, Isabella seems much nicer in that movie!
Also on September 22, 1692, six women and one man was hung in Salem, Massachusetts as witches.
September 23, 480 b.c. ….um, the Greeks knocked the snot out of the Persians again, this time in Salamis. Find out more at the same website as above, The ORB: On-line Reference Book for Medieval Studies. Just scroll down to The Battle of Salamis.
Okay, these are a few tidbits of history for the coming week. Do you have any you’d like to share with us?
BTW, my mom should be fine. They have isolated the germ causing the illness and are giving her antibiotics.
Anna Kathryn Lanier
www.annakathrynlanier.blogspot.com
www.aklanier.com
Posted by Anna Kathryn Lanier at 12:21 AM

Loved the tidbits from history. I agree about Queen Isabella.

I remember a British history professor relating the story of Edward II. His version was even more graphic if you can believe it.

Our class, too, thought a simple poisoned glass of wine would suffice. :o)

I need this book.
I love history, and I've learned some reading your blog.
They gave us the cleaned up version in school. Not nearly as intriguing.

Hi, everyone. Thanks for stopping by. Sorry for the blanket reply, I just got in from subbing 5th graders....fun age. Actually, they were all pretty good today.

Kristen, I really didn't get into the gory details as I guess I could have, but wow, you do have to wonder what Eddie ever did to her to deserve to die like that!

I love books like this, Sandy. Another book I like is "How Long Did It Take." (I think that's the title). It's a little book with a green jacket. The author tells about 3 dozen events in history and how long they took, from the snapping of the picture of the raising the flag on Iwo Jima, to the plague to, well, lots of things. It's a great starting point for a blog, as the lessons are only about a paragraph long.

Anna Kathryn, Isabella was no one to cross, was she? I hadn't heard that bit of history and am always interested in English history. Not as much as Texas history, of cours. LOL I appreciate all the work you do for the chapter!

Ah, Queen Isabella. That lovely lady was also the person responsible for the Spanish Inquisition--from which she raised enough money to finance Columbus' first voyage of discovery. She was nothing if not. . . .determined. Great post!

Hi, Carol....no, I think this is a different Isabella, but if an Isabella started the Inquinsition, then, they were all ladies not to cross! Edward II's wife was from France.