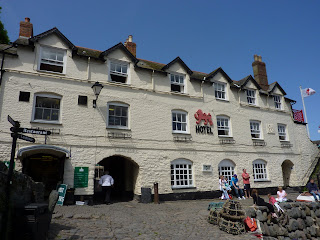 Clovelly is a very old fishing village in Devon clinging to the side of a cliff. A place where the people clung to life equally perilously as they harvested fish in all kinds of weather.


This is the Red Lion hotel where we stayed and as you can see we were blessed with lovely weather. It was once several fishermen's cottages and was joined together to form an inn a great many years ago.

Early records of the village date back to Saxon times, but  it has been around in something like its present form since the 16th century.  If you haven't visited Clovelly, then hopefully these pictures give you a sense of this charming spot.

The population in the village in 1801, my interest being the Regency, was 714 people and a great many of these would have been children, since families were large and the number of cottages is quite small.

The hillside is very steep so you must have to go up very slowly and you will have to take lots of breaks, but first may I suggest a small libation at the bar in the Red Lion.  We also had a crab sandwich for lunch, which was delicious.


To get down to the hotel by car (as only hotel guests are permitted to do), we used what is called The Turnpike road, which in the old days was very steep and very rough and it is this way that the supplies were delivered to the village at the very bottom of the hill, only to be have to then carried up to the houses. 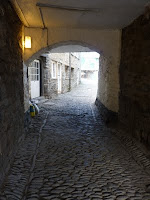 This is the cobbled alleyway that leads from Turnpike at the back of the Red Lion to the harbour side of the pier. 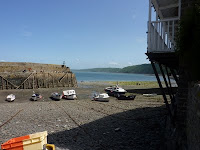 And here is the harbour as it appeared to us the day we arrived. You can see that the tide is out. 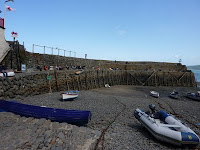 I have to say that we were enchanted with this village which looks across to Wales.

My question for you is, do you have any idea how they would have brought goods from the bottom of the hill or the harbour up those steep roads to the town?

Until next time, Happy Rambles
Posted by Unknown at 8:51 AM

Great pictures. Brought back lovely memories of my trips to the English countryside. No idea how they got things up those steep cliffs but I assume they would have to use some sort of pulley mechanism, no?