My August release, Spirit of the Mountain is available already in print format at my publisher. The Wild Rose Press. It's my first attempt at a paranormal, but to me it feels like a historical. I did major research into the Nez Perce or Nimiipuu tribe to be able to write this story about the daughter of a chief who is asked for in marriage by a warrior of the Blackfeet(Blackleg) tribe which at the time of the story were according to the words of a current Nimiipuu "considered the same as how you considered the Huns". I used this fear and hatred throughout the story when the heroine is talking and thinking about living with the Blackleg(the name the Nimiipuu called the Blackfeet).

I not only researched books on their day to day living conditions, their society, and their beliefs, I also read as much as I could in their own words. Myths and legends books and any snippet I could get that was in English but translated directly from their words. It helped me to get a feel for their speaking and cadence to their dialogue.

Here is a Nimiipuu story that I copied from the Nez Perce loop I'm on. As you can see by reading the story all of the stories handed down through the generations were like our fables. They taught a lesson. 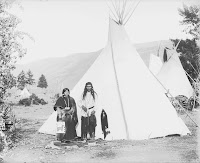 A long time ago there lived in our Blue Mountains a boy who was an only child. His parents had pampered and spoiled him until he was quite selfish and disagreeable.

His parents died and he was obliged to live with the rest of the tribe as an orphan. Because of his selfishness he was not well liked and the other children did not like to play with him. Some of the children learned that the camp was to be moved and made plans to get rid of the spoiled boy.

No one told him that they were moving and that morning they took him out to the high cattails to play hide-and-seek. They would hide and then call, "Who! Who!" Part of the time the boy was following his own echo. The children slipped away and hurried back to the camp in time to go.

The boy wandered about listening to his own echo for some time before he decided that the others had left. When he found his way back to camp it was deserted.

He was hungry and by rummaging about he found some roots that had been left. Still hungry, he decided to try some fishing. With a thorn on an improvised string he made from fibers and hair left at the camp, he placed a worm on the thorn and fished. Thus he secured fish.

Not wishing to eat it raw, his mind turned to fire, and investigation proved that someone had banked a bed of coals and he soon had a camp fire going.

Night was approaching. Where would he sleep? At last he remembered the little stone and mud igloo down by the stream where the people had taken their sweat baths. He crawled into the igloo and slept quite comfortably.

In the morning, he decided to try fishing, but this time a strange thing happened. When he felt something on his line he pulled steady and hard. Slowly it came, but it was not a fish. It was a boat loaded with many provisions and an extremely homely old lady. The old lady spoke to him, "Don't be afraid little boy, I will not hurt you. I am your Grandmother Experience. I have come to help you."

Grandmother Experience lived with him, after that and helped him do many things - make bows and arrows to kill game, gather food, build shelters, and many other things.

Time went on and the boy lived with the grandmother and grew up big and strong, but wondered where his people were. He commenced traveling about in hopes of finding them. One day he did find them and they marveled at the change he had undergone. He was no longer a spoiled selfish boy. Grandmother Experience had made a self-reliant, pleasant young man of him.

If you'd like to read an excerpt of my book Spirit of the Mountain you can visit my website: www.patyjager.net and click on paranormal. While you're there enter my website contest.
I'll be blogging for six days straight at Seriously Reviewed starting tomorrow, Sunday July 25th. Come on by and read about my hero and heroines from my last two releases. The last day I’m giving away a pdf of Doctor in Petticoats my historical western that released in June. And starting on Sunday August 8th I'm doing a six day blog tour with a contest. Check out my blog to learn more.
Posted by Paty Jager at 12:01 AM 5 comments:

Sex in the City

Despite modern-day beliefs, working women in medieval times were not just relegated to going into unpaid domestic service or running a household. Many skilled tasks were carried out in craftsman’s house or workshop. Wives and daughters were often called upon to assist in the tasks at hand. Though the regulations of many guilds expressly forbade entrance by women, exceptions were made for female family members of a guild member. By the late middle ages there were many cases of widows continuing to run the business after their spouse’s death. Many times men expected their wives to carry on even to the point of providing in their wills that any apprentices must serve out their term under the tutelage of the widow. 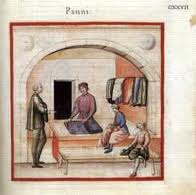 Trades carried on by such widows ranged from small crafts to large merchants trading in all kinds of goods. To manage such large businesses, these women had to be knowledgeable and hearty. One such was Alice de Hortsford whose ship was confiscated as the property of someone else by the marshal. Alice stood before the crown justice and proved title to the ship. The court ordered the vessel and goods returned. After the death of her wealthy merchant husband, Rose of Burford petitioned the royal court at least five times to recover a loan made to the King. When it became apparent that the crown was either unwilling or unable to repay the debt, Rose came up with the suggestion that the loan might be settled by removing the tax levy on the import of her goods. The crown felt that was more than reasonable and Rose brought her goods in tax free for several years.

However, widows were not the only female business owners. Married women many times had occupations distinct from those of their husbands. Many unmarried women supported themselves as shopkeepers. Especially in major cities, girls were often apprenticed to a trade just like boys. Whereas a nobleman might leave a dower in his will so his daughter might be married or put in a nunnery, an urban craftsman or merchant would leave a sum so that his daughter might be married or apprenticed to a trade. Women so apprenticed could ply the learned trade so long as they remained unmarried, as femme soles. Even though most guilds had rules regarding women other than wives and daughters, there is hardly a trade that women did not ply. There are records of women ironmongers, butchers, net-makers, chandlers, glovers, cobblers, haberdashers, purse-makers, bookbinders, spinners, smiths and many others.

Though their wages were sub-standard and many times men were loath to admit it, women were an important part of the labor market in medieval times.

Bad Boys - And TheWomen Who Tame Them