In 2007 I splurged and bought a copy of the BIOGRAPHICAL DICTIONARY OF HISTORY OF SCOTTISH WOMEN and was amazed at the breath and scope of Scottish women who for centuries have been absent in Scottish history. Sure we all know about Queen Mary of Scots and Flora MacDonald, but what about Caroline Oliphant, Lady Nairne (songwriter, 1845), or Finella (assassin, 995) or Marion Gilchrist (physician, 1894). But one of my favorite Scottish women is…

“She kept a stir in tower and trench,

Came I early, came I late,

I found Agnes at the gate.”

---from a ballad attributed to the Earl of Salisbury 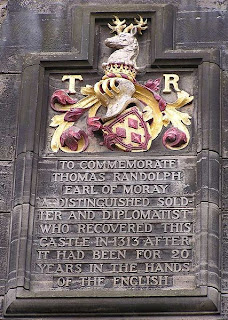 Lady Agnes Randolph was born before 1312, the daughter of Isabel Stewart, a cousin of Walter, the High Steward of Scotland and Sir Thomas Randolph, the first Earl of Moray - a hero of the Scottish Wars of Independence and the man named Regent after the death of Robert the Bruce. He is thought by most historians to be the nephew of King Robert through the first marriage of the king's mother, Marjory Bruce. Agnes married Patrick Dunbar, ninth Earl of Dunbar and March sometime before 1324. 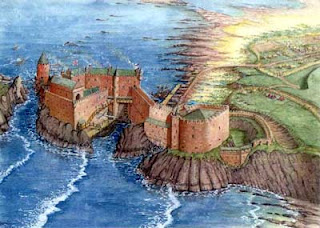 Dunbar Castle in East Lothian was the strategic keep for both the Scots and the English during the two Wars for Scottish Independence After the battle of Bannockburn in 1314, when King Robert Bruce's army routed the army of Edward II, Patrick Dunbar was forced to give sanctuary to Edward at Dunbar before Edward was whisked away to England. Later, Bruce forgave Patrick Dunbar making him guardian of Berwick Castle in 1322. Dunbar tore down his own castle at Dunbar after trying to defend both from the English. However in the second war of Independence, Edward III forced Dunbar to rebuild Dunbar at his own expense to house English soldiers. But in 1338 Dunbar now a patriot of the Scottish cause got it back.

In early 1338, while Patrick was elsewhere with the Scottish army, Agnes was left to defend the castle against the English Earl of Salisbury. Salisbury thinking a castle held by a woman was easy pickings but he quickly learned Agnes was no ordinary woman, she was a Scot. When Agnes refused to surrender, he catapulted the castle with huge rocks and projectiles, but Agnes rallied her women when there was a lull in the barrage, she signaled her refusal to surrender by having her ladies in their best clothing meet on the ramparts to dust away the mess with white cloths as if they were doing a bit of cleaning, a suitable insult. 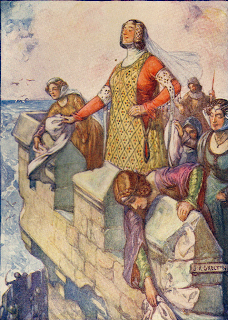 Frustrated Salisbury brings in a battering ram, but of course Agnes was ready as she had her men drop one of the huge rocks his army had catapulted into the castle bailey and smash the ram. Salisbury is now really getting frustrated, so hoping to get inside he tries to bribe a local village inhabitant but was thwarted again. Adding to his frustration throughout the siege are Agnes and her ladies continued attemps to thwart him at every turn with verbal insults as if he were less than important.

As the siege has dragged on for weeks, Salisbury decides to bring her brother, Sir John Randolph, the Earl of Moray now a prisoner of the English, to the castle. Sir John was forced to call out to his sister, that if she didn't surrender he would be killed. Agnes in bold Scottish determination replied:"...if he is killed he has no heirs, so his land will become mine." Not quite the reaction Salisbury expected from a loving sister. Randolph was returned to prison and the siege continued on with an impotent Salisbury. 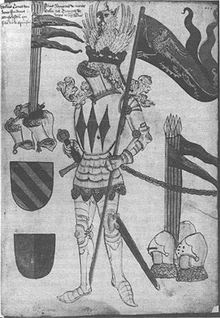 What Salisbury was not aware of was despite the fact his army had the castle surrounded on all sides but one, the water, in the dead of night the townsfolk would row over supplies for those trapped in the castle. When the Scottish hero Alexander Ramsay learned of Agnes's plight and with his 40 Scottish troops he entered the castle through the water entrance to rally those inside. The five months siege ended when Ramsay and his troops surprised the English by riding out the castle gate and attacked the English. Totally surprised the Salisbury’s army scattered, and on June 10, 1338 Salisbury signed a truce and left the castle to Black Agnes. 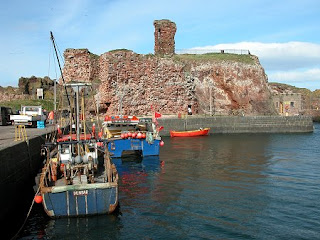 'The mother of two sons who did not survive her, Agnes died in 1369, and her husband died a few months later. Oddly enough, in 1347 her brother John died with no heirs, and Agnes inherited his wealth/lands. She was called Black Agnes not because she was wickedly evil to the English but because she had a dark complexion.

For all those who leave a comment you will be enrolled in a drawing for a copy of David R. Ross’s book Women of Scotland, please leave your email address.

SEDUCED BY HISTORY AUGUST CONTEST: Seduced by History Blog is hosting a month-long contest in August. One winner will receive a ‘basketful of goodies.’ All you have to do is check in on each blog during the month, look for a contest question to answer and September 1-5, 2011 send in your answers to seducedbyhistoryblog@yahoo.com. For full details, read the information on the right or click the CONTEST page.

As one who loves the history of Scottish women here is my contest question..

Who was the first Scottish woman to climb Ben Nevis in a bikini and why?

Great article, Jody. Your knowledge of Scotland and its people continually amazes me. Agnes sounds like an amazing character!

I love to read about these little-known characters and events because they are pivotal to the culture of the Scottish people. Thanks so much for sharing that and those fabulous links!

Jody - Love strong women in history! Truth is indeed stranger than fiction. I can see this heroine in a novel. First thing that a reviewer would say? That's anachronistic. It would never have happened. Ha!

Wonderfully detailed info and photos. Thanks for doing this reasearch!

Jody, I'm not even into Scottish history, but I loved this post. It totally inspired me.

Great post, Jody! I must admit you had me chuckling over the wily Agnes' antics. What a strong woman! I admire her strength. Thank you for giving such an informative and interesting post.

Fascinating, Jody, thanks for sharing. I love reading about these kinds of historically true facts. :) They inspire the muse. Enjoy your weekend!

Lady Anges sounds like she was a clever woman. The Earl must have been proud. :)

Fascinating blog, Jody! I think the line "Agnes was no ordinary woman" would make a great first line for a novel. My e-mail addy is lindas319@yahoo.com. Please enter me in the drawing for the book. Thanks!

Go, Agnes! You really brought her courage and wit to life. Thanks for the article!

What a revelation. Thank you for bringing such a potent, intriguing woman to light. And your effervescent style made the whole post fun to read.

This was wonderful, Jody. I always enjoy the info you have. I believe that there are more women like Agnes in history than our Roman Catholic patriarchal-dominated heritage has let us know about. Thanks for bringing her to life.

Great post---I love Dunbar Castle. It's too bad the castle didn't serve Mary Queen of Scots as well as it did Black Angus.

That was a great post, Jody. Fact is stranger than fiction. If I read that in a novel, I think I'd be snorting and huffing.

You are so great at educating us on such interesting history of Scotland. Great post, Jody.

Fascinating blog, Jody. I love reading about strong women figures in history. They're sadly left out of the history books, so it's nice to find their stories.

Thank you all for the comments. I love strong women in history and it seems the only time they appear in the records is if they are doing the accepted role of women of the era. However, the women with Celtic roots they seem to stay true to the role of women in their culture. Agnes was unique but there were countless other women in scotland and England who had to take on the role of defender of home and hearth.

The winner of the Ross book on Scottish women is Vivian Davis, can you please email me with our address so I can send you the book... my email address is jawisrwa@gmail.com