More Than One Way to Cross a River

The images of the historic cattle trail readily come to mind: cantankerous longhorns, cowboys in chaps, stampedes, campfires and strong coffee. One of the most is iconic and notorious among these was the Brazos River crossing at Waco. 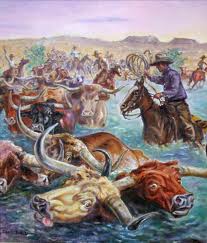 My cattle trail romance, West of Heaven, is set in 1871, the year acknowledged as the heaviest for the movement of cattle north. With my primary research completed, I wrote various crossings into my story with the Brazos River and it's swift, unpredictable current and deep waters, planned as the most dramatic. The safest way to cross was by ferry.

As I always do, I continued researching while I wrote. This system helps me freshen my writing with new details and keeps me from getting bogged down collecting reams of unusable historic trivia. When it came time to write the Brazos scene, I plowed into research again. Imagine my surprise to discover that far from the arduous and time consuming task of loading the cattle group by group, my herd could pussy foot its way across the Brazos on a brand, spanking new suspension bridge.

Begun in October 1868 and ready to open January 1, 1870, the Waco Suspension Bridge was built by the same firm that constructed the Brooklyn Bridge. Supplies to erect it were brought by steamer, ferry, and oxen-pulled wagon from Galveston, 212 miles away. The three million bricks for the two double suspension towers were made locally in Waco. For a while this engineering marvel was the longest suspension bridge in the world at 475 feet.

The final cost of the bridge was estimated at $141,000 contributed by a group of Waco businessmen. Tolls of five cents a head soon paid off their investment. The resulting traffic achieved the goal to bring enough commerce to Waco to turn it from a small frontier town into a thriving commercial destination.

The bridge was wide enough for allow two stagecoaches to pass one another and to accommodate cattle two abreast on one side and pedestrians on the other. It must have been a scary thing walking across facing a herd of longhorns. With a major updating in 1913-1914, the bridge served for 100 years, first for cattle and later for vehicles. It was retired in 1971. Today it is on the National Register of Historic Places and can still be crossed on foot.

My Question: Before the suspension bridge, what was the safest way to cross the Brazoa at Waco?

Excerpt:
The trail between Austin and Waco brought enough rain to give Marcella terror-filled dreams about the upcoming Brazos River crossing. Her effort to keep her anxiety from infecting the crew meant haunting the coffee pot to keep her awake longer and longer hours.
Coming off watch on the third day past Austin, she stopped to fill her cup.
"Are you gettin' enough sleep?"
"Jean Luc!" She hadn't seen him until his voice startled her from across the ebbing campfire. He sat hunched in his poncho under the scant shelter of Hans's tarp. He patted the dry space beside him and beckoned her to join him. "So, you grace us with your presence after everyone has turned in for the night."
"It's dryer here than out there."
She sat down cross-legged next to him. "How is it on the Brazos?"
He put an arm around her shoulder and she snuggled into his warmth. "Are you worried about the crossing?"
"Aren't you?" The rain pattered steadily on the oilcloth tarp.
"Nope. I'm lookin' forward to it. It'll be my first time over the bridge. I heard it's a real marvel. Three million Texas-made bricks in the bridge towers."
*****
She sat up and narrowed her eyes at him over her cup. "Bridge? There's a bridge?"
"New suspension bridge opened last year. Cattle down one side. Pedestrians down the other. Wide enough for stagecoaches to pass each other. You won't have to stick one beautiful toe in that river."
"Why didn't anybody tell me about this sooner?" She wouldn't admit how much sleep she'd lost worrying.
He shrugged, "I didn't know you didn't know."
"Well, maybe if you didn't make yourself so scarce around here, you would have." She set down her cup and folded her arms across her chest, making no effort to hide her irritation.
"I just want to avoid -- uh -- trouble."
*****
The wagons had already rolled out to find the midday stopping place.
Jean Luc adjusted his hat. "An easy day today, drovers. The Brazos was a fearsome river to cross in its day, but man has overcome it with a modern bridge. We'll probably spend more time waiting to pay our toll than we will travelin', but we'll take it slow, keep those critters calm and be on the other side safe and dry. All for the bargain price of five cents a head. After that, fine weather, and an even grade.
"I'll take point, along with Queenie and Jake. Marcella will be up front with us prepared to pay the toll."
He caught Marcella's eye and cast her a half-smile. "Nell and Paz, take right swing, Jasper and Glory, left swing. I want Lou on left flank, Carrie on right flank. June Bug, and Polly, sorry, your turn at drag.
"Remember, keep those hats on and those bandanas, up around your noses. They don't do you any good hung any lower. Any questions?" He paused. "Good, let's go say hello to some critters." He slapped his dusty gloves against his thigh. "C'mon, Butch."

Jean Luc had crossed many a river in his day, seen his share of catastrophes and near-drownings, both man and critter, but he judged he'd never seen a spectacle as the one he watched that day on the Waco Suspension Bridge. Marcella presented their papers and paid their toll. Then, as placid as if they were filing into church on the Sabath, those longhorns walked two abreast along the planks of the bridge.
The noise that resulted was difficult to describe except to say that any fish that chanced to swim below at the time must have been drummed deaf by the time he reached the other side.
Sooner than would have been possible in the old days when the Brazos was king, they were on the other side and on their way. But not before Marcella rode up to him threw her arms around him and planted a huge kiss on his lips. "Now, that's my kind of river crossing," she said before trotting away.
"Well, giddy on up," Queenie shouted, slapping Jake on the back.
A full two minutes later, Jean Luc felt settled enough to give Nickel his head.

West of Heaven by Barbara Scott is available for Kindle, Nook, on Sony, Kobo, and at Apple's iBookstore.

Posted by Barbara Scott at 2:15 AM

Very interesting, Barbara. We get used to the scenes in old Westerns of herds crossing the Brazos on a prayer that it's hard to imagine the herds and cowboys crossing by bridge.

Thanks for the information.

Sounds like my kind of story, Barbara. I can hardly wait to read WEST OF HEAVEN. Thanks for your great post.

Thank you, Kirsten and Caroline. Because of no WiFi access last night, I had to type the blog on iPhone. I've since added pictures and an excerpt if you have a chance to visit again.

A bridge? Who'd a thunk it? :) I just can't picture John Wayne using the bridge to cross though. Good thing your characters are wiser.
Good luck with the book. Sounds like a winner.

Interesting post, Barbara! Hope your book sells many copies. That's great you found useful details to include in your book from your research.

Thanks for the interesting post. About earlier ways to cross--ferry makes sense. Was it one of the kind that had a rope to keep the ferry boat from drifting downstream?

I learned some new and interesting things from this post. I like that the bridge is still around today and can be visited.