Last week I was informed my historical paranormal Spirit of the Mountain placed first in the paranormal category of the Lories Best Published Book Contest.

The funny part about it is I have never considered it a paranormal book. When my historical editor said it had to go to the fantasy line at Wild Rose Press I drug my feet kicking and screaming, "It isn't a paranormal."

I have Indian spirits who are shape shifters and integral characters in the book. This is what makes it fall under the category fantasy/paranormal. To me the spirit element is Native American. It is part of their culture and therefore is more historical than paranormal, but I've lost the argument many times.

Native Americans have long held the belief that animals carry spirits and those spirits were called upon to help with hunts, battles, and the day to day living required when living off the land. These spirits were depicted in drawings, ceremonies with elaborate costumes, and in their stories. Many myths/legends have the main characters of Coyote, bear, skunk, and weasel.

Here is a Nez Perce tale: 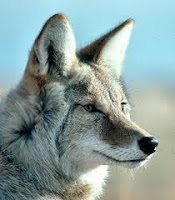 Coyote was a wise man, and Fox was slow-witted. Coyote said to Fox, "Now we shall have to get up some scheme to procure food. You are slow-witted, just like your father. My father was not that way: he was wise. I have taken after my father."
They were in their camp; and Coyote said to Fox, "If you keep perfectly still and do not move, we shall get some food." Then Coyote began thus: "I wish that I and my friend could hear the sound of five packs of food falling at the door!" Then they heard five sounds: "tlitluk, tlitluk, tlitluk, tlitluk, tlitluk!" Coyote jumped up and ran out, and there he saw five packs lying at the door. He took the three largest ones for his share, and left the two smallest ones for Fox. The large packs that Coyote got were all dry meat without any fat, but the two little packs contained fine meat. In three days Coyote had eaten all his poor meat; while Fox had a great deal left, because his was so very rich. On the fourth morning Coyote was hungry, and kept his eye on Fox to see if he had eaten all his share. Now, Fox had eaten only one of his packs, so Coyote jumped over and took the other. Then he said to Fox, "You are a fine fellow never to divide up with your friend!"
Five times they repeated the magic act and got food, but the sixth time Coyote wanted to see who brought them the meat. So he said to Fox, "I am going to see the man who gives us meat." Fox replied, "You had better not try to do that, because this is the only way we can get food." But Coyote was determined to see. He stood at the door, and cut a peep-hole so that he could look out with one eye. Then he repeated the wish; and when the packs fell, he saw a man going up over the ridge who wore long hair in a wig. This man was Deer Tick. Coyote shouted after him, "Oh, you man with the wig, you go over the mountain!"
Think you they got food again from the man Coyote had shamed?

SEDUCED BY HISTORY AUGUST CONTEST: Seduced by History Blog is hosting a month-long contest in August. One winner will receive a ‘basketful of goodies.’ All you have to do is check in on each blog during the month, look for a contest question to answer and September 1-5, 2011 send in your answers to seducedbyhistoryblog@yahoo.com. For full details, read the information on the right or click the CONTEST page.

My question: What is the title of my book set among the Nez Perce?

I wondered about the paranormal tag on your Spirit books, as well. As you mentioned these elements are part of Native American culture and history. Maybe it’s just because I grew up close to Native American culture that I don’t see your stories as paranormal. But whatever categorization I’m glad these wonderful stories were published, and congratulations on your contest win.

What a great story! I laughed when the giver turned out to be Deer Tick. (Eeek, Lyme disease! says my modern brain.) It is odd to have your stories classified as paranormal. It shows how limited/limiting the categories are.

Kirsten, Thank you. Glad you stopped in.

Vivian, I agree. I think in some cases it turns potential readers away that it is categorized paranormal. But then I may also bring me readers. I don't know. Some day I should do a poll.

Two boys and a girl are turned from humans into ethereal beings by the Creator to punish their mortal father. They each take the form of one animal the majority of the time (wolf, elk, eagle), but can become smoke and enter the body of any living being they wish to manipulate that being's body. They are immortal.

This = outside the modern experience of the culture in which this book is published. Human beings cannot become smoke and cannot enter other people's bodies = paranormal

Coyote was a spirit unto himself, and all animals, trees, etc. had their own spirits. If the stories portrayed this (and they did not) = spiritual belief, not paranormal.

History has to be what could physically actually happen. Anything else is "paranormal" meaning "other than normal." This is why the Spirit trilogy could not be categorized as historical.

Hope this clears the confusion :-)

Thanks for clearing that up, Kelly. ;)

The Nex Perce were remarkable. I have a great affection for the Appaloosa horse. Great post!

I guess I agree with Kirsten Arnold. To me, Native American lore is not the same as paranormal. Congratulations, anyway.

Angelyn, Growing up we had an appaloosa gelding. His name was Smokey, and he had a very mild disposition.

Caroline, Thanks for stopping in!

Such a great story to share and so many ways to interpret it.

I look forward to returning for more.