GHOST SHIPS OF THE GREAT LAKES: THE EDMUND FITZGERALD 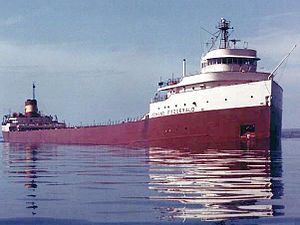 When searching for another legend to write about, I found an article about Ghost Ships of the Great Lakes, which captured my interest, one of the most famous being The Edmund Fitzgerald, which sank in Lake Superior on November 10, 1975.

The Fitzgerald cleared Superior, Wisconsin on November 9, 1975 with a cargo of 26,116 tons of taconite pellets destined for Detroit. In company with Arthur M. Anderson of the United States Steel Corporation’s Great Lakes Fleet, the ship encountered heavy weather and flounder.

The captain, McSorley, reported he was having difficulty, was taking on water and listing. Two of three ballast pumps were working, she lost radar, and he was heard on the radio, saying, “don’t allow nobody (sic) on deck.” He also said it was the worst storm he’d ever seen.

All 29 crew, along with a Great Lakes Maritime cadet, perished, and the ship lies in two sections in 530 feet of water.

According to records, the National Transportation Safety Board voted, unanimously, to reject the Coast Guard’s official report, which supported the theory of faulty hatches. The NTSB claimed it was due to taking on water through hatch covers damaged by heavy seas.

The Lake Carriers Association disagrees with this and blames it on ballast tank damage, whiled the Coast Guard cites faulty hatch covers and lack of water tight cargo hold bulkheads, damage caused from an undetermined source.

The legend of the Fitzgerald has lived on in song as well as many sightings of the ship still sailing the Great Lakes to this day. …in 1985 a commercial vessel is recorded to have seen the Fitzgerald.

The stories of ill-fated ships stirs the imagination. Think of the tragic figures that you could write about in about in a novel: a wife waiting for the return of her captain husband, a young woman tracing her roots and discovering her father went down on a “ghost ship” such as the Edmund Fitzgerald.
Perhaps she catches a glimpse of a man at the helm of a ship that disappears right before her eyes.

The prospects are endless. They sure have captured my imagination.

I’d love to know if any of you have written, or plan to write a book because of unexpected research.
Posted by J K Maze at 12:11 AM

I'm from Michigan so I grew up with tales of the Fitzgerald. There is even a song about it.I love history and read mostly non-fiction. I just finished reading a book called K2 about the second highest mtn in the world and one of the most dangerous. Would be a great setting for romance perfect place for a hero to show up and save the day!

I think as a writer you can't read about something like this and not conjure up what if's. While searching for spe4cific stories I always come across something that fuels another idea for a book. It's in our nature.

Interesting post. I've heard the song but didn't realize the sinking was so young. I thought it was something that happened in the 1800's.

great post---this wreck has always haunted me. Not until recently did they find the hull. For a long time it was as if she had vanished. "Superior never gives up her dead." Love that song.

I get goosebumps every time I've heard that song--ever since I was a teen when the song came out.

In answer to your question, yes, especially when it's little known information the world should know about.