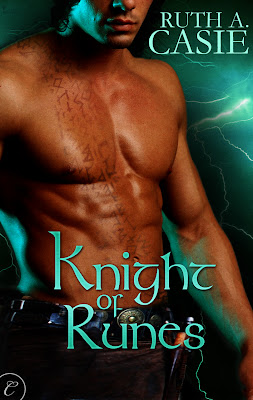 Have I got your attention?
This is the cover of my debut book, Knight of Runes, releasing November 14, by Carina Press. *Heavy sigh* for the release and the cover! Runes, the writing down Lord Arik’s chest, play a large part in this story. Runes hold both the family secret and magic that the heroine, Rebeka, must decipher to finish her quest and win her man.
Runes are an alphabetic script used in Northern Europe from the first century c.e. until well into the Middle Ages. In addition to their use as a written alphabet, the runes also served as a system of symbols used for magic and divination. Runes fell into disuse as the Roman alphabets became the preferred script of most of Europe, but their forms and meanings were preserved in inscriptions and manuscripts.
The primary characteristic differentiating a runic alphabet from other alphabets is each letter, or rune, has a meaning. For example, "ay", "bee", and "cee" are meaningless sounds denoting the first three letters in our alphabet, the names of the first three runes, "fehu", "uruz", and "þurisaz" are actual words in the Germanic language, meaning "cattle", "aurochs*", and "giant", respectively. Runes also have magical and religious significance, thus transforming the simple process of writing into a magical act. Runes are also used for divinatory readings and creating magical spells.
In our popular culture, runes are associated with having mystical properties. One possible reason for the association is the etymology of the word rune. The Germanic root of the word run, means "to conceal", "a secret". There’s another way to explain its mystical context.
At first runes were used as a sacred writing system and later became not only the magic, but also the civilian script. The first Runic inscriptions appeared around 200 AD, but its origins may lie much deeper in the pre-history of Northern Europe. For the next thousand years it was used in Germany, Scandinavia, England, and Lowlands, and only in late Middle Ages it was replaced by the Roman script everywhere in Northern Europe.
The strange sharp forms we recognize today results from rune inscription on metal, stone, or wood boards. Since the alphabet, which was probably invented in Scandinavia, was spreading to the British Isles and to continental Europe, its symbols changed somehow, as well as the number of them. Modern science makes a distinction between the Elder Runes (up to the 9th century), and the later Younger Runes, or Scandinavian Runes. A special variety existed in Anglo-Saxon England from the 7th to the 10th century.
The Elder Runes, used mostly for magic purposes, contain many personal names and their lexicon is sometimes hard to understand, though the language is clear. There are about 150 runic inscriptions of this period, and some of them contain just one or two symbols. The Younger inscriptions are more numerous (about 3500), and are mostly documents written in particular Germanic languages.
Though the origin of Futhark is unknown, there is no doubt that the alphabet is connected with the alphabets of Southern Europe and the Mediterranean (Greek and the Italian Peninsula.
My next task is to study my cover, really hard, and see if I can decode the runes. It may take me a very long time. Oh, the things I do for history!
Posted by Ruth A Casie at 12:01 AM