People sometimes wonder why I set my romance stories in the early 1600s. Is this my favorite time period? Would I like to travel back to that time?

It isn't an often-done period when it comes to historical romance. Everyone is so used to stories set in medieval times or Regency or Victorian. I just had to be different, didn't I? Yeah, I do like to be unique. But there is a specific reason I chose this time period and it has to do with kilts. 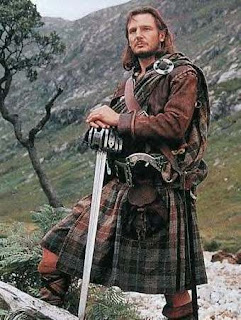 My historically set stories are Scottish and I wanted my heroes to wear the great kilt or belted plaid aka feilidh-mhor (great wrap) or a breacan-feile (tartan wrap). My research told me those were not worn until at least 1575 or perhaps slightly later. So if I accurately wanted my hero in a great kilt I couldn't put him in medieval times (although I love medieval stories.) No, I couldn't pull a Braveheart and ignore historical accuracy completely.
Here is a picture of Liam Neeson as Rob Roy. The costuming is apparently more accurate than Braveheart. For one thing, the story is set much later, in the early 1700s when great kilts were actually worn.

I have visited the wonderful Tartan Museum in Franklin, NC as part of my research. http://www.scottishtartans.org/kilt.html or http://albanach.org/kilt.html are among the best websites for researching kilts and other Highland dress. I want to quote something from the website: 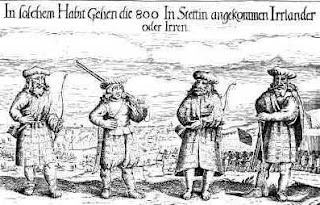 "The truth of the matter is that only one document has yet been found that dates from before 1600 and without a doubt describes a belted plaid, the earliest form of the kilt. It is an Irish source, written in Gaelic. In the Life of Red Hugh O’Donnell written by Lughaidh O’Clery, we read of a group of hired mercenaries from the Scottish Hebrides, employed by O’Donnell in 1594."
"These were recognized among the Irish by the difference of their arms and clothing, their habits and language, for their exterior dress was mottled cloaks to the calf of the leg with ties and fastenings. Their girdles were over the loins outside the cloaks." ~Matthew. A. C. Newsome Scottish Tartan Museum

The girdles in this case would refer to belts and the mottled cloaks would be the plaid. A few more examples of early kilts. The red one is Lord George Murray about 1746. The second one shows two ways to wear a kilt, with the top portion used as a cape for warmth, or with the top portion secured at the shoulder. The third pic is Lord Mungo Murray, around 1680. 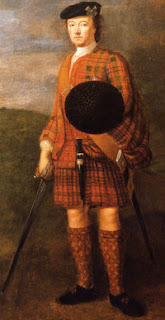 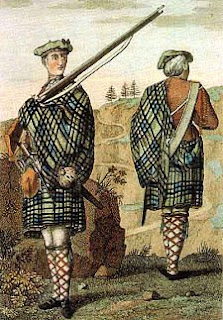 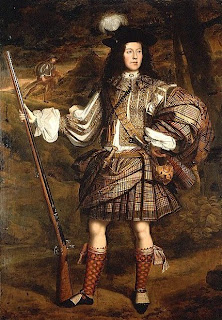 The below picture would be considered a small kilt, which came much later. Notice the top portion of the plaid is missing.

For the purposes of my stories, I also needed the Highland clan system to still be firmly in place, so they had to be set before 1746 and the battle of Culloden. And because of the plots of a couple of my novels, I needed a time period of relative peace between England and Scotland. So that's why I chose the reign of King James I & IV. He was king of Scotland first, then at Queen Elizabeth's death, he became king of England too.

Once I decided this time period would fit the needs of my stories, I delved into it to learn all I could about King James and his time period. But I couldn't focus on him and England completely because my stories predominantly take place in Scotland.

Some of my stories (like Devil in a Kilt) are time-travels. Would I like to time-travel back to 1621 Scotland? Hmm. That's a tough one. In one way I would like to... if I knew I could get back to modern day! I do like my modern conveniences, health and safety. There is nothing particularly romantic or appealing about the reality of the time. There were plague epidemics going on at various times, not to mention revolts, rebellions, riots, and clan feuds. One could be tortured or hanged for something minor. Hygiene at the time was abysmal, whether personal or in the streets. When I was in Edinburgh, I took a tour of Mary King's Close and the tour guide was not shy about presenting the gruesome facts of the 1600s. And since we were right there on that narrow, steep, dark (now underground) alley, it was all very easy to visualize. The furthest thing from a romantic fantasy. 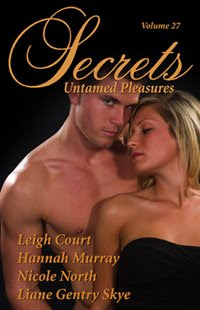 I do escape into my stories and mentally travel back to 17th century Scotland, but I must put my own romantic spin on them. I'm not writing a history textbook; I'm providing fun entertainment and that means a hot man in a great kilt who bathes regularly. :)
Nicole North
http://www.nicolenorth.com/

Check below for a way to enter to win a copy of my book, to be released in July! 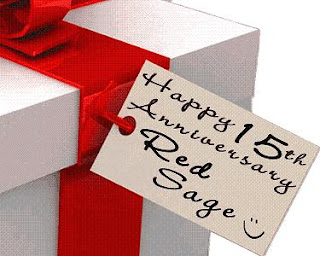 And You Could Win!


To celebrate its Fifteenth Anniversary in June, Red Sage is throwing a party! Every party needs presents, and here’s a gift that could win you the July Secrets anthology and Calista Fox’s new novel, Object of Desire!

Here’s how to play the party game.

Anyone can play! All you have to do is “kidnap” this logo and post it on your blog or website. Copy and paste the jpg image of the anniversary gift to your own blog or website to kidnap it. Be sure to include these instructions so people know how to play!

Invite your readers and friends to send an email with the subject line “Ransom Note” to eRedSage@gmail.com Inside this email, they must include a link back to your kidnapped logo.

Then you and your friend will both be entered into a drawing to win free trade paperbacks! Every time one of your readers sends a ransom note with a link, you will be entered again! Each Ransom Note is worth two entries in the drawing -- one for the person who sends the Ransom Note, and one for the linked blog or website. And you both can win!

Want more chances to win? Invite your readers and friends to kidnap this logo, and then you can enter again by sending a Ransom Note linking to your friend’s blog or website!

The more times you enter, the more chances you have to win! But get your entries in by June 30. We'll be drawing the winners on July 1!

Good luck, and have fun!
Posted by Nicole North at 8:54 AM

Fascinating! Thanks for sharing. I like a romantic spin too :) Can't wait for your release!

Great post! I had no idea about the kilt-dating thing. My first Scottish romance was Jude Deveraux's Highland Velvet. I have no idea what time that was, but I'm thinking not the 17th century. Regardless, it was fantastic and drew me in to the wonderful world of the Scots. I agree with you on being in modern times, too. As a reader, I used to notice that no women back then ever had hairy legs. As a writer, none of my heroines do either! lol
Thanks for the interesting facts and great books!

I love writing Scottish heroes during this time period.

Eliza, thanks!! Yes, I've got to have that romantic spin. :)

Tess, LOL! I'm with you. I NEED plumbing.

Jennifer, I think I read Highland Velvet too! So long ago I can't remember for sure. :) But I used to read all Jude Deveraux's books. No hairy legs for my heroines either. LOL

Renee, my favorite kind of heroes for sure! :)

Liam Neeson as Rob Roy... it doesn't get much better than that. Thanks for the information on the great kilt. I'm looking forward to reading your new book!

Nancy, Liam does look great in that great kilt. ;) And thanks!! I hope you enjoy my story!!

Very interesting reading, I had thought they had the great kilt much earlier thanks for clarifying it. It caused me to do a bit of research on my own. So from your reading would they then in the earliest times up thru the medieval period worn a leine, being a long tunic? Would it have been quilted like the those in thelowlands? So what came first the kilt or trews? Not much different than their counter parts in the lowlands/borders, minus the hose. Got to keep those hairy masculine legs shown.

Great post! I love a man in a Kilt, bring em on!

Jody, Thanks! I would say, yes, it appears the leine was worn before the great kilt came into "fashion." It's thought to be a long shirt or tunic sort of garment. (Worn in Ireland also.) I don't know if it was quilted or not. I haven't researched this garment as thoroughly as the kilt. Here's some great info: http://albanach.org/leine.html
Some people believe trews (sometimes shown as tartan trousers) is an older garment than the great kilt.

blog, Nicole. I love all the history concerning Scotland. The kilts definitely are intriguing. Can you imagine modern manhood in one of these garments? I mean as a daily thing not a show!!!

Paisley, yes, that would certainly be interesting. Here in the south I imagine they'd get quite sweltering too, with all that wool. But they were apparently the perfect garment for their time and place. Scotland is a cool or cold place with a lot of water.