The following article was published in Il Leone Italian-American newspaper. This is a shortened version of the original article. 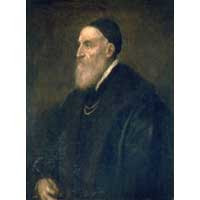 Ask any scholar who he believes is the most prominent artist of the Renaissance period and his answer will undoubtedly be Titian. Regarded as the leading painter of the Venetian School, Titian's life began in a small village of Cadore, five miles from the foot of the Alps.

Born Tiziano Vecellio, the exact year of his birth has been disputed for centuries. While scholars agree it was in 1488, Titian himself claimed he was born in 1476. He was named for a saint in whom the Vecellio family had a strong connection. Saint Tiziano had been a bishop and practiced from a chapel that belonged to a Vecellio ancestor.

Titian came from a long line of lawyers and soldiers. His family was not rich, but neither were thy destitute. Life in Cadore was not easy. At a young age, Titian dabbled in drawing with charcoal. His father noticed a special talent in the boy and sent Titian to Venice where he apprecenticed with the mosaicist Sebastiano Zuccato. Titian was ten at the time. 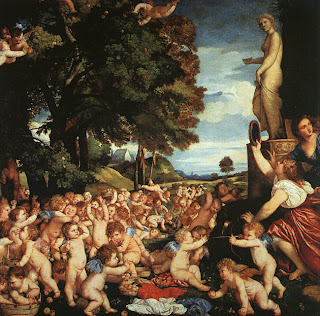 With his interest in drawing, Titian soon moved in with an uncle and studied under two brothers, well-known artists Gentile and Giovanni Bellini. Years later, he moved to Padua where he painted three frescoes for the School of the Saints. In 1513, he returned to Venice to paint frescoes in the Ducal Palace. By now, his artistic abilities spread out and he showed interest in not only portraits but also religious and mythological painting.

Titian's reputation did not formally escalate until 1532 when Emperor Charles V commissioned the artist to paint his portrait. He was so pleased by the portrait that he created titles for Titian: Titian Count Palatine and Knight of the Golden Spur. These titles granted Titian entrance to the court and also gave his sons the rank of nobility. 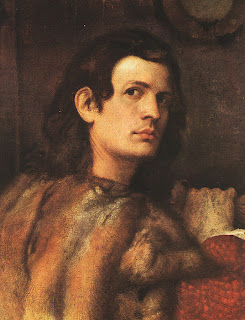 In 1543, Titian traveled to Rome to paint Pope Paul III and his nephews. He met with Michelangelo, who had mixed professional feelings about Titian's work. The great artist "commended his [Titian's] lively manner of painting but thought his work was deficient in drawing." However, Michelangelo's opinion did not damage Titian's credibility.

In personal matters, Titian was closed-mouthed. He let others see only what he wanted them to see. It was obvious to other artists that he was devious about money and gained work to his advantage. In other words, Titian was a shrew businessman. He had no illusions about his own status and from where he came.

Until his death on August 27, 1576, Titian remained well aware that he was an outsider in the culture and habits on the elevated, in spite of the titles bestowed upon him by Charles V.

While his work gained widespread acclaim, Titian preferred the simple life and worked out of love for his craft up until the day he died.

While I'd heard of Titian (my love of etymology found him under eponyms--you know, all those Titian-haired beauties? This is the guy!), I really didn't know much about his life. Thanks for sharing.

I love Renaissance art history. It really was fascinating how much status the top artists were given. His family was elevated to nobility based on his talent! (and probably some politicking involved too).

Thanks for the interesting tidbit!

Thanks for the background on Titian, one of my all-time favorite painters, wouldn't you know? And not just because he often put Papillons in his paintings. Okay, that is why. :-) I was thrilled to pieces when one of his paintings (Venus of Urbino) graced the cover of my latest historical romance release.

Hi Gwynlyn:
I would have put up the entire article, but I didn't want anyone to get bored. LOL

I had read a romance (I think it was a romance) years ago with Titian as a main character. Unfortunately, that is all I recall.

Thanks for stopping by.

Jeannie:
The Medici were connoiseurs of art and were responsible for many artists' popularity. I suppose if a real noble took an interest, that artist was a mighy lucky fellow, lol. In fact, many artist were considered a cut above a physician or lawyer.

Dorothy, how lucky you are to have one of Titian's paintings on your book cover! Since my article went up, I'm finding so many who have an interest in Titian. I wasn't expecting that.

Papillon in Italian is farfalla. Just thought I'd throw that in, lol.

How very interesting, Jannine. He was definitely very talented. I wonder...how he was able to draw his own self portrait? Looking in a mirror? heehee

Very interesting post, I learned a lot from it.