Making a Debut in the Regency

Talking of debuts, my first Harlequin Historical is currently available in England. I was there earlier in the month and quite delighted to see it on the shelves.

The London Season started in March/April time and went to sometime in June. It was tied to Parliament. Each year the Queen held Presentation Drawing Rooms two or three times a week during the Season. Wives and daughters of peers, members of parliament, or the landed gentry were allowed to be formally presented at Court. For the daughter, this was called her come-out or her debut. Young men made their bows.

The picture is of a Court Dress from 1817.When the young lady in question was about 17 or 18, her mother would send in a request to the Lord Chamberlain indicating she wished her daughter to be presented. Only a lady who had herself been presented could sponsor her at the drawing room. The King and Queen did not recognize anyone who had not been presented to them.

It provided the young woman with an gilt-edged entry into society. However, a young lady who had not been presented could still go to balls, routs and other entertainments, if she was invited. 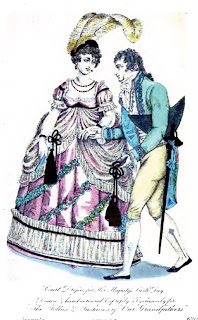 Here we have a lady and gentleman in court dress for 1807.

During the Regency, the presentations took place at St. James's Palace at events called Drawing Rooms. Hoops and white feather plumes, as shown in the picture above, were required dress. After waiting for hours, and only permitted to stand in the presence of the Queen, the young lady would be announced by the Chamberlain and walked to where the Queen sat and made a deep curtsy — which had been practiced and practiced while wearing the hooped skirt. A few pleasantries were exchanged, the young woman answering any question the Queen put to her, but no more. When the Queen indicated she was dismissed, the young woman made one more deep curtsey, and then walked backwards out of the royal presence all the while praying she wouldn't trip over her train.

There were several years in which no Presentation Drawing Rooms were held during the Regency because of the King's illness. Between the King's birth day in 1810, and April 30 1812, there were no drawing rooms held. You can imagine the preparations and the requests after that length of time had passed.

So while presentation to the Queen was not required, it was certainly expected for the members of the ton.
Posted by Unknown at 12:03 AM

Great info, Ann! I'm a big fan of Georgette Heyer's Regencies (of course!) and remember her desperate Mama's were often wringing their hands over whether there'd be a Drawing Room in a particular season or not.

Wow that's fascinating, Ann! Thanks for the info!