I put up on facebook the other day the question- Which came first the Easter Bunny or the Easter Bonnet? Of course, I received some interesting answers none of which answered my questions. LOL

Which, made me dig into the history of both and found that they both go back much farther than I expected.

The Easter Bunny actually originated as the symbol for the pagan festival of Eastre. The goddess, Eastre, used the earthly bunny symbol for the Anglo-Saxons to worship to her. The Easter bunny was also use in pre-Christian fertility lore. And because of the fertileness of the hare and the rabbit, they were symbols of new life in the spring season. 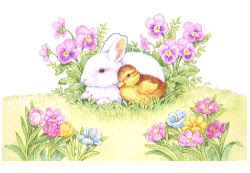 The Easter Bonnets? They began before Easter was celebrated. The first bonnets were circles or wreathes of flowers to celebrate the coming of spring. After so many months of drab darkness the round shape was to symbolize the shape of the sun and the path it takes about the earth and the flowers and green leaves to show the new growth and color. 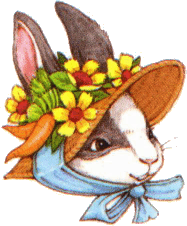 Easter was once known as the "Sunday of Joy". Mothers and daughters, who wore the dark mourning clothes after the Civil War, began wearing colorful hats to this Sunday service, adorning the hats with blooming, fresh flowers. If the flowers weren't blooming yet, they made paper and ribbon flowers and added feathers.

What a perfect post for the day, Paty! Adorable illustrations! Always love reading about the origin of holidays. I've often wondered if they are even more ancient that we believe.

Thanks Deb. It was fun researching the information.

Love the origin of celebrations and traditions. I didn't know about the Easter bonnet. Thanks for sharing.

Your welcome Karen Michelle! I was surprised, too.