When I began writing my first manuscript, a time travel set in 1871 Wisconsin, my knowledge of the era came mainly from history books (like those read in school), from movies, or from other romance novels. It wasn’t enough. I needed to know more.

In each scene, I struggled to imagine myself in my heroine’s mind, a late 20th century urban business woman cast back into the life of a 1871 farm wife. But, although I had grown up in a house built in the late 19th century, it wasn’t the same. I hadn’t actually lived in the time when that house was new.

What did they eat and how was it cooked? What illnesses were common; what medicines were taken? What wer 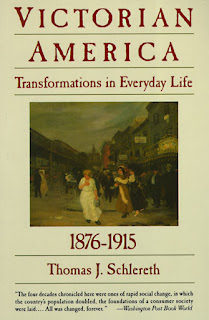 e their beliefs and values? How much was a pound of sugar? Did women hand-sew everything, or were some clothes ready made? What did a child learn in school? What dances were popular? How were holidays celebrated?

Not that I needed to put all those details into the story, but I needed to know so I could put myself in my characters’ minds.

In those pre-Internet days, I trudged to the library. There were, of course, long shelves filled with history books. I'd already read many. Most were written about famous events and battles, about economics and politics. I found almost nothing about how the every day man and woman actually lived their day-to-day lives.

What I was looking for, but didn’t realize it until a few years later, were books on cultural history.

Over time, I’ve found many books that proved helpful to better understanding the era. Foremost of these was a series Harper Collins published called Life in Everyday America Series.

I discovered a wealth of information about my Civil War veteran hero when I found The Life of Billy Yank: The Common Soldier of the .

Later I uncovered its companion book – The Life of Johnny Reb.

Diaries and journals are an incredible source, first hand impressions of the time. Mary B. Chestnut’s Diary from gives riveting accounts of a southern woman’s life in the Civil War. These treasures have the added benefit of letting you hear how people spoke, and wrote, in that time.

Today we are so fortunate to have the internet. Through it, a whole world of resources have been opened.

A favorite site of mine, one I've shared before with Hearts Through History readers, is the Food Timeline, a record of foods and when they were introduced from the beginning of man’s recorded history.

There’s a huge amount of information on World’s Fairs from the first one held in 1851 to the present. Go to Expo Museum.com.

Victorian era fashion information can be found at Harpers Bazaar.

I’ve found a wealth of material on the Lone Star College - Kingwood American Cultural History site. It gives links, decade by decade and topic by topic, for 19th Century America. It also has a link which will take you to the 20th Century.

~ What are your favorite books, or websites of interest for learning about cultural history and how your characters lived?

From the comments received for this post, I’ll hold a drawing for a lovely hand-crocheted bookmark. Drawing to be held Friday evening, April 29th. Be sure to leave a link with an e-mail address where you can be reached.

AND THE WINNER OF THE BOOKMARK IS...Anna Kathryn Lanier! Thanks so much to all who read and commented. Enjoy the links!

Please visit my blog at debmaher.com.

Deb, welcome to Seduced By History. Some of my favorite resources are diaries written during the era. It really gives you a taste for all that was going on.

Fascinating stuff, Deb. I think I was born in the right time...life was so hard before!

A Food Timeline is an excellent way to set the mood and of course particular era of a story. Nice article with much to inspire a writer

Great post. Deb, my priest is a full time history professor at the Lone Star College! He has weritten a condenced American History book and he also writes Westerns and is published!!!

I discovered their site a few months back, and it is great!

Oh, I love diaries from 'wagon train' women. I have several of them.

Excuse my mistake. Sometimes I feel anonymous. But that was an error on my part.
Sorry. To repeat-Food Timeline is an excellent way to get a setting for the reader.

Good info Deb. I am a gatherer of books about history especially the Pacific Northwest where I set most of my books.

Wow, your comments popped up fast. Thanks to all for stopping in.

Renee, you are my first commenter on Seduced by History! I agree so much on diaries. First-hand accounts are so helpful!

Tess, I agree. As much as I love history, and would even love to "visit" I love my hot showers and airline trips to visit my family too much!

JGavin, I was thrilled when I found Food Timeline...great site, isn't it? btw, I love your blog.

Anna, so cool that you know someone from Lone Star, and he's your priest! I LOVE that site, both 19th & 20th century versions. So many links, pictures, connections, info!!! Still haven't finished with them all.

Thanks again, everyone. To bed now but will check in again in the morn.

Hi Paty, just saw your post. The Pacific NW is so beautiful. I was last there at age five and still have vivid memories of trees, rain...and green. Lots of green.

You are so correct about focusing on cultural history as a tool to bring your characters to life. Sources that fall under that category have helped me so much with my Regency romances. Thank you!

I don't write historical, just wanted to stop by. I like the detail in Jeannette Giles' books (if I have the name right), but they are fiction so not to be relied on. You gave a great list. I want to read them just for fun.

Carly, I'll have to look up Jeanette Giles' work. Your website is fascinating, as is the Fierce Romance blog!

Thank you both for reading!

Debra, this is a gold mine of information. Thank you so much. I do wonder why we hanker back to harder times, though. Is it something about needing the struggle of life to appreciate what we have?