Not Your Mother's Civil War Romance 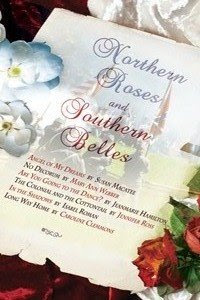 I'm so excited about the blog tour I'm taking part in this week for the anthology five other authors and I have put together for The Wild Rose Press. We all wrote novellas which take place in the Civil War era, either before, during or after the war in my case.

My Texas family's experiences inspired my story, Are You Going to the Dance? With TWRP's support, our anthology, Northern Roses and Southern Belles, came together easily. I was so encouraged that I've written two other novella's since, and I have one out now with Red Rose Publishing, titled Pure Heaven, and have submitted another novella, a werewolf historical, to The Wild Rose Press for consideration. Along with all our anthology stories, it has been a thrill to see Are You Going to the Dance? in print because the story that inspired it is dear to my heart.

My novella is inspired by my great great grandparents' experiences although it does not represent my Dutch great great grandfather or my French great great grandmother. They and many folks in the German communities of the Texas Hill Country believed strongly in preserving the Union. If he had been caught taking mules he raised to the Union Army, he could have been shot by the Confederates.

The town where they lived in Texas voted to form local militia units rather than send men to the Confederate army. Their son joined the local militia unit and took part in protecting their own town. The local citizens, including farmers and ranchers also enjoyed weekend gatherings to dance and socialize.

My great great grandmother was known for her independent spirit. It is said of her that she would have rather been outside riding her horse and working with the men than working inside the house. One night, she found an Indian brave who had been wounded during a raid, but not discovered by the farmers. She saved his life without the farmers knowing, and as a result his tribe never again raided their farm.

I hope you'll check out our blog tour. You still have an opportunity to win a prize.

Tuesday August 4: Caroline Clemmons is at Slip into Something Victorian http://slipintosomethingvictorian.wordpress.com

The Civil War as you've never read it! Northern Roses and Southern Belles now available from The Wild Rose Press!
For an excerpt, visit my web site www.JeanmarieHamilton.com
Enjoy!
Jeanmarie Hamilton
Posted by Jeanmarie Hamilton at 1:39 AM

Great post, Jeanmarie! And 'Are You Going To the Dance' is a wonderful story!

I'd like to invite everyone to follow our blog tour, there are more prizes to be had, and the grand prize is a print copy of the anthology signed by all six authors!

Hey, Susan,
Thanks for the compliment on my novella! With your story the first one in the anthology, our stories have a great send-off. I'm really proud of all of our novellas!

Enjoyed your post! I especially liked the family background you shared. That personal connection makes stories just that much better, and more "real" to me. 'Are You Going to the Dance' sounds like a great read.

I agree with Kathryn (well, Jeanmarie and Susan, too!) that it is really special when personal family history is used in a story.

And this story, especially, because it is so great!

I have been hearing a lot about this book and I love books set in the Civil War period. Keep up the good work!