Medieval England: When was it? 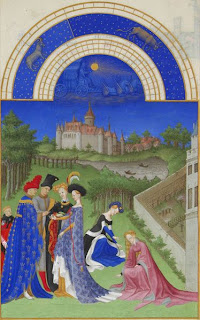 When you want to write or read an English medieval, what assumptions do you make about medieval times? That there will be castles, kings, and knights in shining armor? That no one will bathe, people will die of the plague, and women will wear tall headdresses? By any definition “medieval” encompasses hundreds of years. So depending on exactly in which year your medieval is set, the castles, armor, hygiene and fashion may be very different than those that first come to mind.

Not even historians agree on exactly when the medieval period began, or if “middle ages” means the same thing as medieval. For England, use the 5th century fall of the Roman Empire and the arrival of the Anglo-Saxons to identify the start of the middle ages; others begin with the 7th century. Many label the years up to the 11th century as the dark ages or early middle ages. The era is often also divided into high and late, though sources disagree on the precise dates those designations encompass.

The scholars I follow generally define medieval as beginning in 1066 (with the Normans and William the Conqueror) and ending in 1485 (after the Battle of Bosworth and the death of Richard III, the conclusion of what we now call the Wars of the Roses and the start of the Tudor period with Henry VII). Even that definition covers more than 400 years!

Can you imagine lumping together one modern century, like the 20th, considering how many life-altering products were invented and how social mores changed from 1910 to 1990? Watching a few episodes of Mad Men shows us how different the working world of the 1960s was from today. It’s hard for us to believe that computers weren’t common household items until the 1990s, and that many of us grew up without our own telephones, much less a cell with Internet access, multiple apps and texting. Just because medieval times took place hundreds of years ago doesn’t mean society and lifestyle were the same in 1300 as they were in 1400. Even so, many readers and even authors lump hundreds of years into one pot, assuming that life was pretty much the same at the beginning as it was at the end. That just by dressing the heroine in a gown, giving the hero some armor or chain mail and a squire to polish them, and sticking them all in a damp, stone castle (which is often filthy and requires the heroine’s touch to tidy up), you’ve got a medieval.

But attention to the unique, precise details of the specific years in which a book is set--the subtleties of history and politics, and how changes in ruling factions affected the country, food, drink, clothing, architecture, societal perceptions, religion, coins of the realm and more--that make all the difference. That, in addition to being accurate, help make the story come alive and can enhance conflict, plot and character.

But because of stereotypes and assumptions about medievals, I’ve received some frustrating comments from contest judges. One wrote that Richard was not the Duke of York but the Duke of Gloucester. In the 1450s when that manuscript is set, as indicated by the dateline on the first page, Richard Plantagenet was in fact Duke of York, and the Richard she meant was a mere toddler. One commented that people didn't have carpets. Well, in this time, they weren’t common but were being acquired by the wealthy, which my character was. And I don’t quite recall why, but one judge made a comment about Columbus. Who would also have been a child in the 1450s. If I'm not certain about who's who or what existed when judging a contest or writing my own pages, I'll look it up to make sure.

Another issue is word choice. Though I had carefully and constantly consulted ­English Through the Ages to be as accurate as possible about when words came into common use (I wanted to use bluestocking, but clearly that wasn’t period!), a few non-authentic words are bound to slip in. An NYT best-seller graciously critiqued one of my medievals; her view was that even if a word was technically in use at the time, if it sounded too modern it should still be replaced. As a judge, I’ll overlook some words (aware that the earlier the manuscript is set, the more challenging it is to sound authentic. Many, many words we want and need to use were not around in 1066), but will note words that jar me out of the story and if there are many words that sound like and were in use much closer to the Regency than the medieval period.

What do you think?

Ruth Kaufman owns approximately 200 books about medieval and early Renaissance England and has written 5 medievals. Visit her at www.ruthjkaufman.com.
Posted by Ruth Kaufman at 8:12 AM

I did a whole study on the Medieval period while in college [I was a History major]. I submitted the hypothesis in a project that the "Medieval" times actually began when Constantine moved the capital of the empire to his eponymous town, since from that point on The Roman Empire was no longer the conquering imperial force it had been, but was quickly becoming a more contemplative Christian empire.
Also, I dated the "High Medieval" from 800 when Charlemagne was crowned. There were certainly "non medieval" years after that, but from the point on the West had a growing sense of its own identity.

Like The Gentleman, I too start the Middle Ages in the late 4th Century and divide into early, middle and late Middle Ages.

As for judges checking to be sure about facts before "correcting" writer entries, that's a sticking point for me too. I've had bad experiences with judges assuming they know more than I do! Had I judged your ms set in the 1450s, there's no way I'd have told you Richard was not Duke of York but Duke of Gloucester, as I'd have known you were referring to the father and not the son *g*. Like you, when I judge, if I'm in doubt about facts or word usage, I LOOK it up and make sure I'M not wrong before commenting.

@The Gentleman: So when did you date the end of "medieval?" And what did you call that period?