has always held a special place in my heart. My first novel, In Sunshine or in Shadow, is set in . I’m married to a man who is half-Irish. And there’s a very special connection between and my hometown of .

During the Great Famine of 1845-1850, thousands of starving Irish refugees fled to . Conditions on the “coffin ships” were brutal. Typhoid, dysentery, and other diseases ran rampant, and many died on the voyage that was supposed to take these people to a new and better life. Hundreds of children were orphaned, either on the ship, or later, at the quarantine station called Grosse Ile, not far from .

As lost and bewildered as these children must have felt, they weren’t entirely alone. families, mostly French Catholic, were eager to take in these children of their own faith. Not only were they welcomed with open arms, but most kept their Irish surnames. So a little bit of survives in . 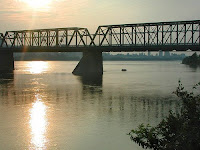 It’s still seen today in the “Irish Stone,” a momument which stands at the approach to ’s . During the construction of the bridge, workmen discovered human remains of Irish immigrants to . They decided to erect a large stone that bears this inscription:

To preserve from desecration the remains of 6000 immigrants who died of ship fever A.D. 1847-8, this stone is erected by the workmen of Messrs. Peto, Brassey and Betts employed in the construction of the A.D. 1859

Posted by Cynthia Owens at 6:18 AM

What a fascinating piece of history. Thank's for sharing.

Great information! I don't know a whole lot about Canada. I tend to stay focused on the West coast with all my research. I found this very interesting!

How interesting and touching to have such a monument. Thanks for sharing.

What a sad story, Cynthia! Having some Irish in my background on my mother's side, I love learning about Irish history. It's amazing to me how many people were lost just trying to escape the country of their birth so they and their children could have a chance at life.

This is really fascinating. I would love to go to Ireland. It is a dream of mine. Maybe one day!

Thanks, Pat. Some of those Irish names can still be found today, mingled with the names of the French-Canadians who adopted these children. Cas in point: Several years ago, we had a premier of Quebec named Claude Ryan!

You're welcome, Ann. I love history, and particularaly Irish history, and it's nice to find those connections literally in your own backyard.

Hi Paty. Canada has a lot of wonderful stories, and I'm glad to be able to share them!

I love to share my Canadian history. Glad you enjoyed!

Yes, it is a sad story, but at least for some, it had a happy ending. I guess as a romance writer, I tend to focus on that.

Glad you enjoyed the story. Ireland has been a dream of mine for years, too, and I'm finally going to realize that dream this summer. A whole 10 days there - and I can't wait!

I did not know about ship fever, Cynthia. I've got goose bumps!
I know I have French relatives on my Dad's side in Canada, but now I wonder about my Mom's Scots-Irish side. My Mom's Dad's side came to N. Carolina, but we don't know about my Mom's mom, who was adopted. However, we know she was brought up in a family of Scots-Irish. In addition, she did have red hair, green eyes, and beautiful porcelain skin. So now I wonder. Very interesting.
Julie

Thanks for stopping by. Isn't history wonderful when it gets your curiosity aroused?

Absolutely fascinating, Cynthia. Especially when you think how everything is connected in some way.