The Staff of Life in the Middle Ages 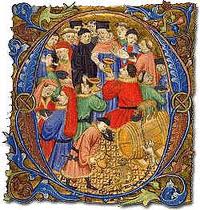 This is where it all started, the 1963 movie, Tom Jones. Albert Finney (Tom Jones) licks his chicken bones and Joyce Redman (Mrs Waters) looks like she's making love to an apple. It showed that playing with your food could be fun and anything edible will do! But what was a banquet really like?
The extravagant feasts and banquets of the Middle Ages are legendary. However, while menus for the wealthy were extensive, only small portions were taken. Hosts were expected to offer extensive choices.  With more extensive travel, a change in society emerged, possibly prompted by the Crusades, that led to a new and unprecedented interest in beautiful objects and elegant manners. This change extended to food preparation and presentation and resulted in fabulous food arrangements with exotic colors and flavorings. Banquets prepared during the Middle Ages were fit for a king.
Staffing and Presenting the Banquet
The kitchen squires where responsible for provisioning the kitchen. Assisted by the cooks, they chose, purchased, and paid for the goods.
The food was plated on the serving dishes and staged in the kitchen until it was time to bring to the tables in the Great Hall.
The Noble of the castle, and his distinguished guests, sat at a great table that was set on a raised platform, a dais, at one of the hall.
Buffets were tables with a series of wooden stepped shelves. The number of shelves indicated the host’s rank. The more shelves the higher the rank. The 'Stepped Buffets' were covered with rich drapes and used at banquets and feasts. The Nobles impressed their guests by using their finest gold or silver plates as service plates on the buffet.
The banquet feast consisted of three, four, five, and even six courses. At times the presentations of the main courses were made into a theatrical representation with colored jellies of swans or peacocks or pheasants with their feathers. Served as a specialty the beak and feet of these birds were gilt and placed in the middle of the table as a centerpiece.
French Medieval Banquets
The French cooking historian described a great feast given in 1455 by the Count of Anjou, third son of King Louis II of Sicily. This description demonstrates just how theatrical a presentation can be:
“On the table was placed a centre-piece, which represented a green lawn, surrounded with large peacocks' feathers and green branches, to which were tied violets and other sweet-smelling flowers.
In the middle of this lawn a fortress was placed, covered with silver.
The fortress was hollow, and formed a sort of cage, in which several live birds were shut up, their tufts and feet being gilt.
On its tower, which was gilt, three banners were placed.
The first course consisted of a civet of hare, a quarter of stag which had been a night in salt, a stuffed chicken, and a loin of veal.
The two last dishes were covered with a German sauce, with gilt sugar-plums, and pomegranate seeds.
At each end, outside the green lawn, was an enormous pie, surmounted with smaller pies, which formed a crown. The crust of the large pies were silvered all round and gilt at the top.
Each pie contained a whole roe-deer, a gosling, three capons, six chickens, ten pigeons, one young rabbit, and, no doubt to serve as seasoning or stuffing, a minced loin of veal, two pounds of fat, and twenty-six hard-boiled eggs, covered with saffron and flavoured with cloves.
For the three following courses, there was a roe-deer, a pig, a sturgeon cooked in parsley and vinegar, and covered with powdered ginger.
The feast continued with a kid goat, two goslings, twelve chickens, as many pigeons, six young rabbits, two herons, a leveret, a fat capon stuffed, four chickens covered with yolks of eggs and sprinkled with spice, a wild boar, some wafers and stars and a jelly, part white and part red represented the crests of the honored guests, cream covered with fennel seeds and preserved in sugar, a white cream, cheese in slices, and strawberries, and, lastly, plums stewed in rose-water
Besides these four courses, there was a fifth, entirely of wines then in vogue, and of preserves. These consisted of fruits and various sweet pastries.”
I researched medieval banquets when I wrote Knight of Runes.  Eating is fundamental and enjoyable. While Arik and Rebeka don’t get it on quite like Tom and Mrs. Waters there is definitely an air of the playfulness in the scene.  The trouble with watching that scene is I really get hungry. I’ll let you figure out for what!
Ruth A. Casie
Pre-Sale Now Available for Knight of Runes
Posted by Ruth A Casie at 12:01 AM

How interesting. I had no idea the banquets were so elaborate at that time. I had in mind wooden trenchers shared by couples with simple foods. What a difference! Thanks for the information.

The description of the food makes me wonder if this wasn't like the 'nouvelle cuisine' of the 20th century when appearance seemed to be more important than taste.

Cooking has changed so much even in my lifetime that I wonder what one of these banquets would have tasted like. Obviously, a lot of meat and, it seems, not too much in the way of vegetables. And, of course, it's impossible to guess how much spice was actually used but it does sound like they went a little heavy.

Can you imagine cooking this? Especially the pies. No Pillsbury pre-made crust to open up and put in the pan! And I'm sure that rose water didn't come in a pricey little bottle with a cute label! Talk about cooking from scratch.

I remember the movie. The banquet looks so sumptuous. Where do I sign up?