Looking for a great setting for your gilded age historical? I found one for mine when I recently visited Saratoga Springs, NY.
For much of the 19th century, Saratoga Springs was the “Queen of the Spa” resorts with the added attraction of horse racing and a first rate casino along with proximity to New York City from which it drew a large part of its monied clientele, attracting the likes of the Vanderbilts, Fisks, Goulds and Asters. For a time, it also boasted the largest hotels in the world such as the Grand Union Hotel where congressman, senators and bankers gathered, The United States Hotel where the likes of Vanderbilts, Goulds and Rockfellers held court on the piazza and Congress Hall which hosted the Asters and other old New York scions.
Saratoga Springs and its mineral waters had attracted visitors since the early 1800’s. With concerted efforts on the part of innkeepers and hotel owners, by the 1830’s Saratoga was a fashionable place to go for one’s health but also for "good society" once lectures, entertainment and hops (balls) were added to the fill the days and nights. The 1830’s also saw Saratoga purposely go after gamblers in hopes they would test their skills “at faro and chuck-a-luck in the billiard halls and bowling alleys, and a room was fixed up for roulette.” (Saratoga: Saga of an Impious Era by George Waller).
Before the Civil War, Saratoga had always attracted a lot of southern families who migrated to the cooler north during steamy summer months. Though the Civil War cast a shadow over the place during the war years, as soon as the war ended, the Southern families returned. The New York Times correspondent reported in a June 26, 1865 article that “… I have learned that several families from the South, the avant couriers of a large influx from  regions most war-scarred, have engaged rooms here, with the view of enjoying again a luxury long debarred. This points not only to peace, but fraternity. The land longs for the latter, to confirm and complete the former.  Both established, and the cup of the people’s joy is full.” 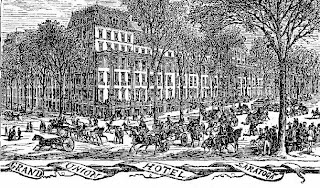 It was really after the Civil War, and after several fires which forced the rebuilding of some of the key hotels in a much grander style, that Saratoga began its opulent phase.

The scale of many of these Saratoga Springs hotels was monumental. The Grand Union was updated several times but in 1875,  it claimed a ballroom that was 85 x 60 feet with 27 foot high ceilings from which hung three large crystal chandeliers. Covering seven acres right on Broadway, the main thoroughfare, The Grand Union had over 824 rooms available, some of them cottages which rented for $125 per day. The cottages were used mainly by families but a single bedroom cottage could be a discreet place to house one’s mistress. Fodder for many stories, I’m sure.
﻿
﻿

The Grand Union boasted two miles of corridors, twelve acres of carpet and an acre of marble. The Grand Union dining room was capable of handling up to 1400 guests at a sitting " with 35 cooks, 200 waiters, 12 carvers dispensing 1200 quarts of milk, 1500 pounds of beef, 80 chickens and 250 quarts of strawberries" or so the guide book of the day related. (The Grand Union Hotel by Beatrice Sweeny, City Historian Saratoga Springs, New York). Where would you find such grandeur today?

A block down Broadway, The United States Hotel was almost as large encompassing a three-acre park within its boundaries and 768 guest rooms and cottage suites and  all equipped with marble washstands and cold running water with some of the suites offering a private bath. It also had a large ballroom and spacious dining room, all superbly appointed. Congress Hall was on a slightly smaller scale but all three lined the main street with large piazza's overlooking Broadway. Seen in one long sweep the hotels made quite an architectural display.
There were enough places to stay that the middle class could find accommodations and rub shoulders with the elite during visits to the springs and, of course, at the many hops that were held. From that stand point, Saratoga was certainly a more “democratic” resort than say Newport where hotel space was limited and one needed a grand home or an invitation to one to be part of its society. Florence Vanderbilt met her husband, a Western Union clerk, amongst the glitter of Saratoga Springs.
﻿﻿﻿﻿ 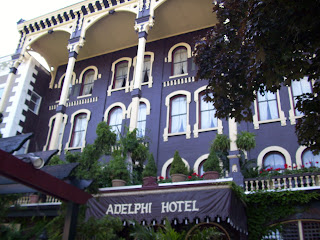 In 1877 the Adelphi Hotel was built, squeezed in between the Grand Union and the United States. The Adelphi's piazza also overlooked the street and added to the unified architecture of these great hotels. The Adelphi only had a little more than 150 rooms but it entertained some of Saratoga's elite as well, including John Morrissey, the colorful Tammany Hall politician who helped bring racing and gambling to The Springs. He died at the Adelphi in 1878 with citizens keeping vigil outside its doors.

The Adelphi's smaller stature is what helped save it from the fate of it's bigger sister hotels. As modern conveniences such as elevators, electrical wiring, indoor plumbing, central heating, phones, etc. were required by vacationers, updating such mammoth palaces became financially prohibitive. With travel made easier, more options opened up. By the 1920's these grande dames were shadows of their former self. By the forties they were in substantial decline. The United States went up in smoke during that decade and the wrecking ball signaled the demise of the Grand Union in 1953.
﻿
﻿

﻿﻿﻿﻿
The Adelphi, however, managed to hang in there and in 1977 the current owners purchased it and started to restore it to it's former glory. Today, you can get a taste of the grandeur of Saratoga's Gilded Age with a stay at the Adelphi where all modern conveniences await you as you step back in time. We stayed at the Adelphi during our visit in a beautifully appointed Queen suite and savored every wonderful minute of it.
Next month I will have more on some of the colorful visitors who called Saratoga Spring home during the summer season. So I ask you again, where could we find such grandeur today?
Anne Carrole writes about cowboys who have grit, integrity and little romance on their mind—and the women who love them. You can check out her contemporary romance, Re-ride at the Rodeo, at www.annecarrole.com. She also is co-editor of the review website, www.lovewesternromances.com
Posted by Anne Carrole at 1:00 AM

Oh, I love those old bygone places. One of the most interesting resorts is the one in St. Michael's, PA, the site of old Lake Conemaugh that destroyed Johnstown when the dam collapsed. Great post. Thanks!

Great pics and photos! Great to see the owners restored it. So much of history ends up being lost due to demolition and modern reconstruction.

I'm surprised that more people don't use Saratoga as a backdrop. In many ways, it is the American equivalent of Bath in the late 18th & early 19th centuries.

Great photos and info. Thanks for sharing.

Angelyn, I never herd of St. Michael's so now I have to google it. I love finding out about these places!

Hi Susan-thanks for stopping by. It really is great what they've done with the Adelphi especially when you realize how much of Saratoga's granduer was lost to demolition.

You know I never thought about Saratoga being the American Bath and having been to Bath, which I loved because of the Jane Austen connection, I totally agree with you. The only difference is Bath still looks a lot like it did back in its heyday while you only get glimpses of Saratoga's past in little fragments of a place here or a place there, though it is still a great place to visit and worth a trip.

Thanks Caroline for stopping by and glad you enjoyed the photos! I'll have more for next month's post on Saratoga's famous (and infamous) visitors.

Quote: Florence Vanderbilt met her husband, a Western Union clerk, amongst the glitter of Saratoga Springs.
﻿﻿﻿﻿

Thanks Marybelle for stopping by and glad you liked the post. :)

Hi Nancy ( that is me waving). Thanks for stopping by. I will have more on Florence and her beau next month and it is an interesting story. :)

I don't know how I came upon this site, but, I'm sure glad I did!!! So much interesting reading!!