A Vision of the Cattle Trail

The historic cattle trail from Texas to the railheads in Missouri and Kansas served as the core of much Western fiction and several epic movies. During TV's Golden Age, when Westerns reigned, Clint Eastwood followed the herd for more than seven years as trail ramrod Rowdy Yates in Rawhide. The cattle drive is still a popular background in fiction today, yet few of these creations involve women in a major way,
When the idea came to me to write a cattle trail book, I researched the role of women on these adventures. As in many all-male professions in the nineteenth century, women occasionally disguised themselves as men in order to participate. Newspaper reports of the era told rare stories of females passing as males and working as cowhands and cattle dealers. At least two women were reported working undiscovered as drovers. Some women ran cattle ranches either in their husband's absence or on their own arranging for the trailing of the herd as needed. One woman was reputed to be a daring rustler who then drove the stolen herds to market. Other reports say she was only the paper owner of the herds her husband rustled.

However, no cattle drive that I discovered was ever accomplished with a crew of nearly all women. But that's precisely the situation I needed for my historical  Western, West of Heaven. For what's Marcella McGovern to do when she unexpectedly inherits her father's marketable cattle and her mother's bawdy? She has all the cattle eating up her profit and the women unable to make a living now that she's closed up their house. Top that with the cattle baron's scorned widow who issues Marcella an ultimatum to get the cattle off her land and local cowboys a warning that if they work Marcella's drive, they'll never work another in Texas. Marcella's  only recourse is to train the woman as cowboys.

West of Heaven has all the standards you'd want in a trail book, the rivers, the stampede, the singing to keep the cows calm at night, Because it is a romance and tells women's stories, there's a secret baby, a  husband seeking a wayward wife, an abandoned fiance, a triangle or two, a German cook who is using the journey to perfect the gourmet recipes he'll need when he opens his restaurant in Kansas. And, of course, romance.

The era of the great cattle drive was short. The railroads gradually built their way into Texas and other western lands making the journey to the railheads ever shorter,. Yet, that brief time period  etched into history the image of the cowboy we carry today. I figured, why not give the women a chance. It/s 1871, women are already voting in Wyoming.


Tom brought up a hardy mousey brown horse that should suit her. He had a sleekness to him and a wise look. He stood solid while Jean Luc saddled him. Marcella came up to take his reins, stroking the horse's nose and talking to him in soft reassuring tones.
"Does this one have a name, Tom?" Marcella asked.
"Redemption they called him."
"Redemption." From her mouth, the name whispered through the morning air like a word of endearment. The critter ate it up like sugar lumps.
"You got a way with horses." Jean Luc pulled the cinches tight. "Sweet-talking might be all you need to keep you seated. Maybe he won't buck at all. He ain't puttin' up a fight now, but, just in case, try to sit back and catch his rhythm and ride with it."
"Until I land in the dirt with the best of them." She whispered something else to the horse as Jean Luc came around to give her a leg up.
"Have a good ride." He stepped back to clear the way.
Marcella steered Redemption toward the center of the corral, taking an easy pace, showing a confidence that let the horse know he was in good hands. He responded with a cooperation that thrilled Jean Luc. They walked the boundary of the corral without a bump or a bother. A mumble of appreciation rippled through the townsfolk who'd been attracted by the unusual Sunday morning goings-on.
When she looked up, Jean Luc signaled his encouragement by snatching off his hat and waving it in the air. Ezra and Tom nodded enthusiastically. She urged Redemption into a post trot, raising herself in her stirrups so she was half-sitting and half standing, her body bobbing up and down in perfect rhythm to the horse's gait. On this go round she beamed at Polly's barely contained excitement and at Glory with her hands on her hips, no doubt puzzling out why she hadn't drawn Marcella's horse instead of the one she'd chosen. 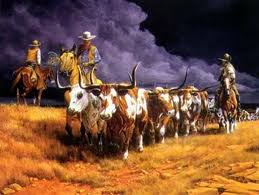 In truth, Jean Luc suspected it was Tom's horse sense that had reserved this mount for her. Not too shy to show off, Marcella directed Redemption into some quick turns and stops before taking him one more time around. She brought him to a smooth stop in front of Jean Luc and dismounted.
Tilting back her hat, Marcella took off her bandana and used it to dab at the sweat on her brow. "I don't know, Jean Luc, do you really think I had to change clothes for that ride?"
Jean Luc rubbed his chin. "Well, how else do you think that horse knew you meant business? Now, ready for some breakfast? Or should we start right in on ropin' and tyin'?"


Barbara Scott is the author of West of Heaven, Listen With Your Heart, Haunts of the Heart, and EPIC Award winner, Cast a Pale Shadow. Visit her at www.barbarascottink.com
Posted by Barbara Scott at 12:41 PM