I know I’ve said it before, but I’ll say it again. I just love the title of this blog and all the articles various writers have been putting into it. When I think of seduced by history, so many things come to mind—in particular is my love of castles. My first time seeing a real castle was when I was eight years old. I was fortunate enough to have grandparents who resided in Paris, France, and they took me to Versailles. After that I visited many castles in the South of France and Ireland. Before that like most little girls I was obsessed with fairy tales, princesses and happily ever after. Seeing such a magnificent castle in person left a huge impression on me, and I’ve been captivated ever since.

Today I thought I’d give you lovely readers a little background on medieval castles.

wooden forts to magnificent stone structures. Earlier castles were built up on large man-made hills called mottes. Surrounding the motte was a bailey, which is like a courtyard. Atop the motte was the castle or better known as a keep, which was fenced in. Surrounding the bailey would be a wall or fence, and sometimes a castle could have more than one bailey, an upper bailey and a lower bailey or inner/outer. Inside the bailey were huts for the people, stables, a chapel, blacksmith, tanner, etc…All the things that will keep the people within the castle thriving—especially if they were caught in a siege. The bailey could be surrounded by a mote and a drawbridge could be raised or lowered to allow entry.

The interior of the castle was a rather drafty place. The window openings were thin and narrow—glass not appearing until the later middle ages, and the floors were made of stone. Even heat from the fireplace seemed to disappear when you reached the corners of a room. Castles were built for security not comfort—however much we wish they were and try to portray in our stories—and completely different than my first view of a castle at Versailles. 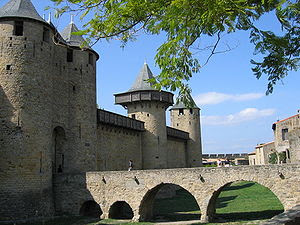 A typical castle consisted of three levels. The ground level was the storeroom (sometimes a kitchen—but most kitchens were set in a building outside of the living quarters as fires happened quite often), and if there were knights, they would often sleep there. The dungeon, if there was one, was set below ground, a dark hole dug into the ground, most of the times.

On the first floor was the great hall. A raised gallery overlooking the great hall, was called the minstrel’s gallery, and was where musicians played during meals. The chapel could have been located within the castle near the great hall or a separate building.

A garderobe was also an important part of the castle, and could be located in any number of places. I’ve seen them set off

to the side on staircases. What exactly was it? This is a medieval toilet room. A hole in a cement slab with a shoot that led to the mote or a pit. Sounds fabulous doesn’t it? When it was windy and winter, imagine sitting on that cold cement with a breeze coming up through that hole…or even worse summer time and the heat increases the smells…

The third floor was the lord’s chamber, the wardrobe and solar. This is a very basic layout. Some castles were much larger, and housed chambers for guests as well.

The furniture in a castle made of thick solid woods, like oak, ash, elm, poplar

, larch and beech. It was put together much like out wood furniture is today: wooden pegs and iron nails. Have you ever bought a bookshelf from Ikea? You’ll put it together with wooden pegs and nails—although I don’t think they are iron.

An adhesive like glue was used to attach fabrics (tapestries, brocades, leathers, and velvet) to the furniture. The woods were also painted, reds, golds and greens being the most popular, but whites, yellows, black and blues were used too. Paint and fabrics were not the only ways to decorate furniture. Often times the woods were carved into intricate designs, or metal work and gilding adorned it.

What types of furniture did they have? Large four-poster beds, pallets, stools, benches, trestle tables, smaller tables, desks, chairs, chests, coffers, altar tables, buffets, wooden barrels (used for storing food/drink, and for taking baths). The previous list could be moved easily to another castle or manor home, if needed, as some nobles and royals often did. Furniture that stayed put were: cupboards, window seats, and built-in wall seats.

Décor in the home consisted of portraits, tapestries, candle holders, religious artifacts, weapons, nick-knacks, jugs, statues, clocks, deer/elk racks, hunting horns, in a bed chamber you would occasionally find a rug either made of animal skins or woven fabrics.

What picture do you have in your mind of the medieval castle? Have you been to a castle? Was it everything you imagined? 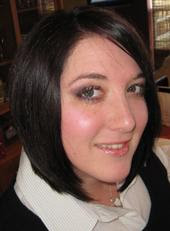 Like what you read here? Check out Eliza Knight’s workshop, A Noble’s Life in Medieval Times, next class beginning June 1st—you do not have to be a member of RWA to participate. Also check out her workshop, The Tudors-An Epic Dynasty, starting May 4th! Visit www.elizaknight.com/workshops.aspx to register.

Loved this post! I also love castles, just the fantasy of them is enough to give me goosebumps. And when you're in them, just imagining what it was like hundreds of years ago is an eerie feeling! I've been lucky enough to have been in a few different castles. I've visited Edinburh Castle, Stirling Castle, Alnwick Castle, Skipton Castle and also, Barmburg Castle. I've seen Loch en Eileen castle and also Urguhart. They're all incredible!!!!! I hope to get my photos of these magnificent places on my blog in the next few days!!! Thanks so much for sharing!!!

Thanks for your comment Andrea! I can't wait to see your pics, I've never been to those castles.

Isn't it amazing the feeling you get when you're inside them? I love it!

You always come up with the most interesting facts, Eliza. I adore castles and have been lucky enough to visit lots of them. One of our children-of-our-heart got married in one. He is Dutch and wanted us to attend and be in the wedding so he chose a castle since he knew I would have a hard time not coming. It had two moats and was quite fancy inside - belonged to a baron. We've also seen the other side of the coin where the comforts were minimal. In all, even though I know there were hardships, I'm still romantic enough to love seeing the next castle over the hill...

Castles captivate us, from their great rooms to their dungeons. I've visited several in Ireland, Kilkenny, Malahide, Bunratty, and the spooky remains of Pirate Queen Grace O'Malley's castle beneath Westport House. I love them all, and I enjoyed your article, Eliza. Nice job!

Great post! I love reading about castles. These photos you posted are beautiful, I would love to go through a castle sometime, but have never had the chance.

Great post, Eliza! I'mplanning to visit several castles this summer when I visit Ireland for the first time - a life-long dream! Bunratty and Malahide castles are on my "must-see" list, as well as a possibly lesser-known castle called Dunguaire. It's the castle on my novel, In Sunshine or in Shadow, so naturally I have to see "my castle."

Great information on medieval castles! I've visited quite a few castles in France, Italy, Germany, Spain, Scotland and England. Even stayed in one during New Years in Scotland which was amazing. They were having a Murder Mystery game that weekend which occupied the restaurant and since we were not there for the game they served us our dinner in a private dining room in front of a fire! So spectacular just being there!
Thanks for allowing me to relive the fun!
Kirsten

Hi Eliza,
This is a fabulous source of information on castles. Thanks for sharing! I've never visited any castles...never been out of the continental US, so that would be hard to do ;) but can't wait to venture abroad having seen these awesome structures. The history behind the castles is fascinating. I wonder if some are haunted :)

Fascinating, Eliza! I'm late as usual, but wanted to say I enjoyed your post! I'm definitely a castle lover and have been fortunate to visit 4 castles in Scotland: Edinburgh Castle, Urquhart, Eilean Donan, and Dunrobin. And I can't wait to visit lots more!