Fun and Pastimes in Medieval Italy

Italy has long been integral in the flourishing of the arts, literature, finances, and fashion throughout Europe. But what did they do in the Medieval period for fun?

In my Italian medieval romances, I have explored many ways Italians have whiled away the hours when not engaging in necessary and important business. In THE LILY AND THE FALCON, I added a game of kicking an animal’s bladder into opposing tents at the hero and heroine’s wedding. Today, this game is called soccer or, as the Italians refer to it, calico.

In the fourth book of my Italian Medieval series, TEMPT NOT MY HEART (not contracted at present), the famous horse races of Siena are a vital part of the story. I’d like to share an article I wrote for Renaissance Magazine entitled “The Palio of Siena.”

Throughout history, men have tested their strength, endurance and skill in ways that often seemed barbaric. The games of medieval Siena were a prime example of the extent these men carried their quest in order to be hailed a champion. For what began among military forces as a war-like competition, soon evolved into violent rivalry between the contrade (districts or neighborhoods) of the town.

Only one contest has survived the centuries—the Palio—which existed well before the 11th century and took place two times a year: on July 2nd, in honor of the Madonna of Provenzan, who miraculously appeared to Provenzan Salvani, the hero in the Battle of Montraperti; and also on August 16th, a day dedicated to the Madonna of the Assumption. 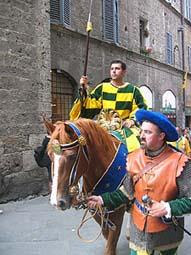 Prior to 1555, during the Palio young men carried colored wooden structures usually representing animals, with followers parading behind them in a procession. After 1555, each district began to organize with headquarters defining territorial limits and announcing specific rules, thereby developing its own badge, colors, animal of distinction for its banner, its own church and religious staff, and a stable for the horse racing on its behalf.

In the beginning, men would talk about “running to win the Palio” (correre per vincerer il palio). As the race evolved over time, they spoke instead of “running the Palio” (correre il palio). Pride played a huge role in these races; the horses were decked out as colorfully as their riders, and each district dressed the part, as did individual supporters. And while the town divided their loyalties to the riders, the idea of the contrade was not enforced.

The days leading up to the races were set aside for a festival. During this time, women and girls decorated the streets with rich adornments, flowers and banners in the colors of
their contrade. These were happier times for the town, and the friendly competition among the neighborhoods to see which one could out-decorate the other lifted the spirits of the Sienese. 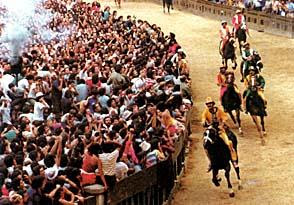 Late in the Medieval period, the horse races, previously run in a straight like through the streets, began taking place around the sloping shell of the Piazza del Campo. But the incline of the piazza proved to be a dangerous course. Over time, many animals were seriously injured or killed because of the unfit shape of the “track.” Run along the outer rim, the actual race ended in less than 90 seconds. But despite the shortness of it, the winner was hailed a hero and the contrade who won deemed superior above all the others. At least until the next Palio.

To this day, the pomp and circumstance surrounding the short race is a sight to see. The pride of 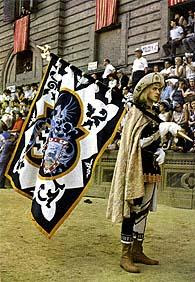 each contrade is the same—the only difference is the more than 500 years of history in between.
Piazza del Campo, Siena

In my newly released Italian Medieval romance, CARINA AND THE NOBLEMAN, you won’t find any sports of yesteryear. However, it is the first book of a trilogy about three psychic sisters separated at birth. To read the first chapter, please visit my website: www.jcortipetska.com

The DCL readers love her!

Great blog. Thanks for all the interesting information.