Travel in the west was done by horse, coaches, wagons and buggies, sternwheelers and later on by train. Learning what conveyances were used where and when is always an ongoing process for me. My first published book, Marshal in Petticoats, I'd set the date and wrote the book with a train scene only to find out there weren't any trains in the area at the time. So I tried writing the scene with a stage coach and it didn't work nearly as well, then I changed the time of the story and had to go through and re-read newspapers for the new time to make sure I had other aspects correct in the story. 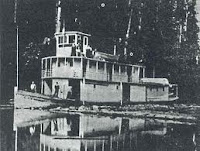 While researching the trains I came across sternwheelers on the Columbia River and set my next book, Gambling on an Angel there. The fourth book in the Halsey brother series, Doctor in Petticoats, has the hero and heroine traveling by train and required even more research to find out about what kind of cars were on the trains in Oregon at that time and how they were set up.

Some of the books I use for researching trains are: Early Oregon Days by Edwin D. Culp, Out West on the Overland Train by Richard Reinhardt, Rand McNally's Pioneer Atlas of the American West as well as several sites on the web. http://www.cprr.org/Museum/Car_Builders_Dictionary/
http://www.pnwc-nrhs.org/hs_or_n.html

A story I'm working on for the fifth Halsey brother book deals with logging. I'm currently reading books on how they logged in the late 1800's. Glory Days of Logging by Ralph W. Andrews and Timber by Ralph W. Andrews. I also plan to visit a couple of logging camps in Oregon.

Research is my favorite part of writing a story.

It is difficult to find out you picked the wrong kind of transportation, isn't it? I wanted to use a train and even ended up down at Old Sacramento to find out why on earth they didn't have more info on trains in 1849 - to my embarrassment, they didn't have trains here either in that time period. Settled for the stagecoach and that worked fine.

I love the research, too, because we live where my stories happened during the 1849 gold rush. I love seeing the history come alive.

It's hard to get an idea stuck in your head and have reality slap you backwards.

Thanks for the article, Paty. I'm going to look up the books you cited. The websites are helpful, too!