During medieval times, nobles and royals often enjoyed themselves at feasts and with entertainers who were employed to--well, entertain them! Probably one of the reasons people today enjoy such venues as Medieval Times and Renn Fests!

If you've taken my A Noble's Life in Medieval Times, then you will recognize this post as one of the lessons. I thought it important to share with anyone who has yet to take the course! Enjoy :)

Entertainers
﻿﻿﻿
﻿﻿﻿ Musicians and musical instruments were used everyday. Some instruments include: flute, recorder, gemshorn, lute, psaltery, vielle/viol, fiddle, harp, organ, bagpipes, and drums. Instruments were not the only form of music however, singing and poetry were also popular. Singers/storytellers were often referred to as troubadours (vernacular lyric poet) jongleur or minstrel. A story could be sung, chanted, or told in an expressive voice. You didn’t have to have a fancy title however to be a singer, and sometimes family members and friends would sing to entertain each other as well. Songs could be religious in origin, tell a folk tale or a real life adventure, or be a little more vulgar in nature. Dancers often accompanied the musicians. The nobles would often join in the dancing or watch was their seated place.

Some extremely wealthy houses had their own musicians, but most musicians traveled from place to place. 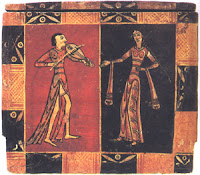 Other forms of entertainment were plays. Plays could be put on by the party who is attending the feast or a drama group could come and perform for the guests. Plays could be mythological, religious, re-tell a real tale, be political, or comical.


Feasts
For some very wealthy nobles every mid-day meal (the biggest most important meal of the day) could be a feast. For others feasts occurred on special occasions and when guests came to visit. Feasts could take place in the courtyard depending on the weather, or in the great hall. 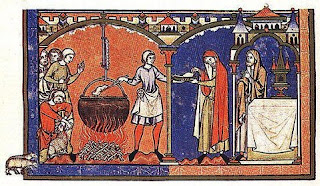 Feasts weren’t just about the food, but also about entertainment. The people would dance, listen to music, listen to stories, watch a play, talk with friends, and of course eat. Food and drink were plenty, and there were always more options to choose from than any one person could eat. If you were attending a feast, you may take a bite of several different dishes and be full. Toasts were given, and everyone had a merry time.

Check out these articles I've written on the subject:

A new release from Eliza Knight! A Lady’s Charade, a medieval romance novel, is now available in electronic format from Amazon, Barnes and Noble, All Romance Ebooks and Smashwords! 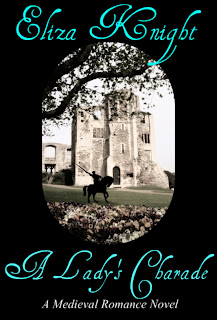 Book Blurb…
From across a field of battle, English knight, Alexander, Lord Hardwyck, spots the object of his desire—and his conquest, Scottish traitor Lady Chloe.
Her lies could be her undoing…
Abandoned across the border and disguised for her safety, Chloe realizes the man who besieged her home in Scotland has now become her savior in England. Her life in danger, she vows to keep her identity secret, lest she suffer his wrath, for he wants her dead.
Or love could claim them both and unravel two countries in the process…
Alexander suspects Chloe is not who she says she is and has declared war on the angelic vixen who's laid claim to his heart. A fierce battle of the minds it will be, for once the truth is revealed they will both have to choose between love and duty.
Given 5 out of 5 Stars from Historical Fiction Obsession!!!
Posted by Eliza Knight at 4:46 PM

Eliza: SO enjoyed the post. love talking medieval, and always learn new things from your posts. In my latest medieval, The Tapestry Shop, the protaganist is a trouvere, which is what the troubadours were called in northern France. As you said, he played a lute, and wrote secular plays and composed music. His plays are still performed. Thanks for this post. All good.

Thank you Joyce :) I love talking medieval too! If only I could have been a fly on the wall...

Your book has gotten some great reviews, and I really enjoyed it myself. I read your post about meeting someone at the HNS conference who'd read it, and thought that was awesome--meant to leave a comment but then kids rushed in... sigh...

Wonderful post. I just purchased "Life in the English Country House" by Mark Girouard which describes medieval households that travelled between castles, manors and lodges. Some ranged upwards to one hundred and even five hundred retainers, servants, etc. Fascinating stuff.

Angelyn, thank you for commenting and mentioning that book! I'm going to go look at it now! I'm actually writing a scene right now that deals with that, and this will be a great resource! Thanks!

Ooo - what a great article! It came at a great time since I'm writing a medieval story right now and need all the help I can get :-)

Hi, I am pleased to follow your website and get these all useful posts. Thank you so much and for you all the best. That is a great job.
fmovies

Everyone loves what you guys are usually up too. This sort of clever work and reporting! Keep up the fantastic works guys I've incorporated you guys to blogroll. entertainers and party pros for hire

Easily, the is actually the most effective topic on this registry related issue. I participate in your conclusions and will eagerly anticipate your following updates. Just saying thanks won't just be sufficient, for the fantasti c lucidity in your writing. I will instantly grab your rss feed to remain informed of any updates.tribute artist for conventions