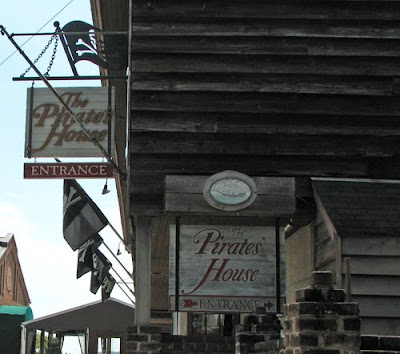 On a recent trip to Savannah, GA, I had lunch at the Pirate's House Restaurant. The food was good and the atmosphere was even better. I love stepping back in time and walking, sitting (or eating and drinking) where people did hundreds of years ago. That was the case at the Pirate's House, which by the way did have a pirate in residence who was (almost) the spitting image of Captain Jack Sparrow. :) 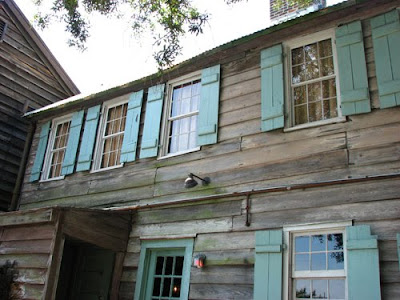 The Pirate's House is divided up into 15 rooms for dining. We sat in the oldest section of the house, knows as the Herb House. It was built in 1734 and is said to be the oldest house in Georgia! It was originally used by the gardener of Trustees' Garden, an early Colonial experimental garden. 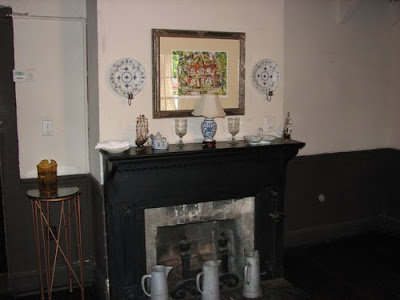 After the garden and Herb House were no longer needed, the building was added on to and turned into an inn for seamen since it is only a block from the Savannah River. Seamen and pirates gathered here to drink, party and tell outlandish tales. 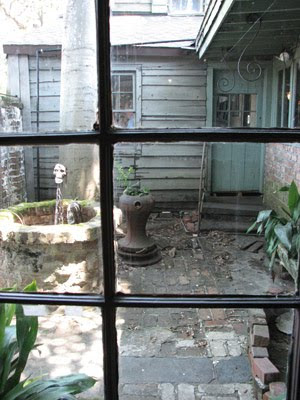 Above is the view I was treated to during lunch... piked skulls sticking up from an old well. I have a feeling this courtyard is haunted! Many men were said to be "shanghaied" and forced to sail the seven seas. In order to complete their crews, captains would wait until the men at the inn passed out drunk... or sometimes they were drugged. They were then carried from the Pirate House in an underground tunnel to the ship. When the men woke up they'd be at sea. One Savannah police officer is said to have been shanghaied in this way and it took him two years to return from China.

The Pirate's House is supposed to be where some of the scenes in Treasure Island (by Robert Louis Stevenson) took place. It is said the house is still haunted by Captain Flint, who hid the treasure on Treasure Island and then died at the Pirate House. 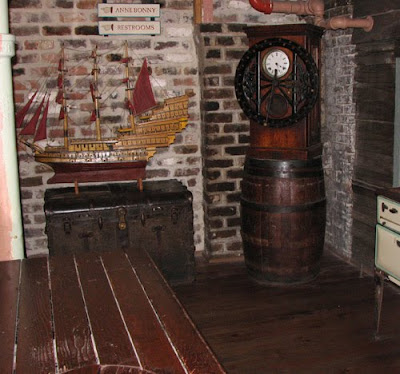 It is a very popular resturant. We arrived at a good time and only had to wait a few minutes. As we left, dozens more people were waiting to be seated. Read a more detailed history.
***
There is still time to enter my Under the Kilt Contest. I will choose a winner Sept. 10.
***
And you can still register for my September Turn Up the Heat! Heightening Sexual Tension and sensuality writing workshop. It starts Sept. 6. To learn more or sign up please visit this workshop page.
***
I recently received an awesome reader review for Beast in a Kilt!
***
Do you like sexy Highlanders and erotic romance? Click here for a hot excerpt of Beast in a Kilt. (Adults only, please!) ;)
Thanks!!
Nicole
http://www.nicolenorth.com/
Posted by Nicole North at 6:42 AM

Lovely pictures, Nicole. I've heard Savannah is a really beautiful city, though I've never had the pleasure of visiting there.

I am positively green with envy, Nicole. A real pirate's inn with all that rich history and possibly ghosts!!!! I SO want to visit Savannah in my lifetime - my dauther of my heart who lives in Florida thinks I am nuts, but I want to see moss hanging on trees in Savannah and now I must add this delightful inn. Thanks for sharing all the photos.

Wow Nicole, you always find the neatest places!!! That is soooooo cool! I would love to go there one day!! Add that to my bucket list!!! Thanks so much for sharing!

Miriam, thanks! Savannah is incredibly beautiful. The atmosphere is haunting and addictive. I was still in Savannah in my mind several days after leaving. Of course that might have been because I decided to set a story there I'm writing. :)

Paisley, it's wonderful! You must go. It's a really easy city to get around in. Driving, walking or there is a free public transportation shuttle that goes all around town. It even stops at the Pirate's House. Also walking around the historic district is amazing. There are so many squares and parks and of course beautiful old buildings. The waterfront is also great! The only bad thing was we went in July when it was literally 100 degrees. Next time I want to go in the spring. I also love the Spanish moss in the trees.

Andrea, thanks!! Hope you get to go! It's one of the neatest places. I was going to say coolest but it was scorching hot. LOL

Wow! The Pirate's House oozed character from your photos. I can only imagine what it felt like to actually be there. Thanks for sharing your trip with us.

Thanks Maeve!! I'm so glad you enjoyed it!! I love taking pics and exploring historical sites.

My parents live in Savannah and we took the kids to eat at the Pirate's House the last time we visited. We loved it! Did you take the trolley tour through "haunted" Savannah? That was great, too.