Camels In The U, S, Desert Southwest

Since I live in, write about, and love Texas, you won’t be surprised to learn that today’s post involves Texas history--but quickly extends to New Mexico, Arizona, and California. If you saw the 1976  movie  “Hawmps!” then you already know that the U.S. Government experimented with the effectiveness of camels in the Desert Southwest. The movie was hilarious, and very loosely based on fact. True, the movie guide calls "Hawmps!" a turkey, but my family enjoyed it. Or, you may have driven through Quartzite, Arizona have seen a monument to the camel experiment.

In 1855, the U.S. Congress, at the urging of Secretary of War Jefferson Davis, authorized the importation of camels and dromedaries to be used for military purposes, and earmarked thirty thousand dollars for the experiment. Davis, a veteran of the war with Mexico, had seen considerable service in the Desert Southwest. Keenly aware of the role that camels had played over the centuries in the warfare of other nations, he believed that the strange beasts could be put to use in the United States as well.

Major Henry C. Wayne and Lieutenant David D. Porter departed for North Africa, where they were met by a third American, Gwinn Harris Heap, whose father had been the U.S. consul to Tunis for a number of years. They acquired thirty-three camels and dromedaries before departing for home in February 1856 on board the ship aptly named Supply.

The ocean voyage from the Mediterranean, through the Strait of Gibraltar, and across the Atlantic was uneventful considering the fragile cargo. On May 14, 1856, the camels came ashore at Indianola, Texas. Reprts said the animals were frantically happy to be on land. I would be too after three months at sea! Ten acres of land had been set aside for them and a two-hundred-foot-long shed had been built to house them. Major Wayne decided first to acclimate the camels to the intense humidity of the Gulf Coast by letting them rest in a large corral.

Writing to Secretary of War Jefferson Davis, Navy Lieutenant Porter said, “We have lost on the voyage but one of those we purchased…and she died from no want of care, but because she was unable to produce her young one…We still have more than we started with, some young ones having been born on the passage, and are in fine condition. All the other camels I am happy to say have not received a scratch…They are looking a little shabby just now, most of them shedding their hair…but they are fat and in good health."

Three weeks later, the animals began first leg of the trip that would take them to San Antonio, Texas, on to El Paso, Albuquerque, and across the arid Southwest all the way to Fort Tejon, California. The camels performed extremely well. Capable of carrying loads of up to twelve hundred pounds—larger than a horse or mule could carry—the beasts lumbered along at a slow but steady pace.

The geat camel experiment eventually failed. With the advent of the Civil War, the personnel at Union garrisons in the Southwest scattered before the advancing Confederates. Some of the imported animals were set free and some were kept in captivity. The last known survivor died in a Los Angeles zoo in 1934--maybe. Even today people occasionally tell tales of seeing lone camels in remote corners of the Southwest.

The chief camel driver used for this experiment was Hadji Ali, known as Hi Jolly to the soldiers. Originally Hi Jolly's name was Philip Tedro, but the Greek-Syrian man converted to Islam and made the trip to Mecca. After the conclusion of the camel experiment, Hadji Ali used some of the freed camels for a freight business for a while, prospected, and tried various other occupations. Later he married a woman and settled down. He died in Quartzite, Arizona in 1902 at the age of 73. At his death, he still believed there were camels roaming loose in the desert. A monument to Hadji Ali in Quartzite AZ is shown below right on the site of his last camp. 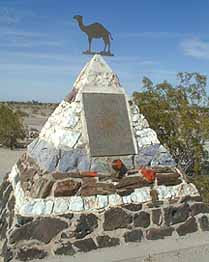 What do you think? Do you believe small families of camels still roam the Desert Southwest? I like to think so, but then I'm a romance author.

Portions of this article came from James A. Crutchfield's bool, IT HAPPENED IN TEXAS, from Two Dot Press, Helena, Montana, published 1996.

Thanks for visiting with Seduced By History today.

Oh I remember the Disney movie staring James Garner as the camel soldiers. Do I believe - heck yes, I still believe in the Lock Ness Monster too. I agree its romantic

I think it was an interesting and sound idea. Who knows how far they may have gone if not for the civil war. I'll have to look up that Disney movie.

I remember having read that the sand of the U.S. was too harsh on the camels' feet.