So of course, I have to blog about the history of the food of Mardi Gras, most specifically the "King Cake" of Louisiana. Before I give the history of the cake, I want to correct a bit of tradition. Most people believe that Mardi Gras parades began here in the United States in New Orleans. WRONG!

The first Mardi Gras parades were held in Mobile, AL. They predated the New Orleans parades by several years. To this day, in Mobile and all the surrounding areas we still have hundreds of parades.

Now about the King Cake. What you might ask is a King Cake? It's a brioche type of pastry baked only at this time of year. It is traditional and has been for hundreds of years. There's a bit of controversy over the origins, but I'll start in the 12th century. The Church at the time celebrated the Epiphany on the 6th of January, the twelfth night feast. The cake, a pastry, had a bean or coin buried inside the cake. The person who got the piece with the bean or coin was declared the King of the night.

The tradition continued from that time and was brought to the colonies by the
French. Again the cake was baked as part of the 12th night celebration. And only then. The bean was replaced with a porcelain figure of baby Jesus in Cajun country of Louisiana in the 19th century along with a filling of sugar, spices and the nuts of the south, pecans. Still the person who got the piece with the doll was declared the King of the feast.

As the season expanded from January 6th to the Tuesday before Ash Wednesday every year, the King Cake became a way to determine the King of the Mardi Gras parade.
Today, King Cakes are available all over the Gulf Coast from Louisiana to Florida.
Tradition dictates now, if you are the recipient of the doll, a small plastic baby figure, you must provide the next King Cake for the next Mardi Gras party. (And we do have a lot of parties!)

About the colors of the cake! The traditional colors of Mardi Gras are purple, green and gold. There's also a reason for the colors. Remember this is related to the celebration surrounding the arrival of the Magi on January 6th after the first Christmas. Purple means justice, and the green stands for faith. Gold stands for power and any traditional King Cake has purple, green and gold icing or sugar sprinkles on it. I've included a picture of the traditional Cake. 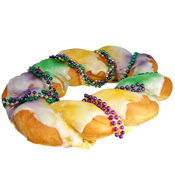 Today the cake can be filled with fruit, spices and nuts, cream cheese filling or a cream filling. It's a rich bread-like pastry that is loaded with Calories. However, since pastries are not supposed to be available during the season of Lent, the Calories don't count. Ha!

Of course, being interested in the history of food, I have to give you the recipe for the traditional New Orleans King Cake. I must also warn you. The King Cake must only be baked between January 6th until the Tuesday before Ash Wednesday.

This recipe which comes from a recipe in the Times Picayune Newspaper of 2003.

For the dough: Pour the warm water into a large warmed bowl. Sprinkle in the yeast and stir until it dissolves. Stir in the warm milk, butter, sugar, nutmeg, and salt. Add 1 cup of the flour and blend well. Stir in the eggs and enough of the remaining flour to make a soft dough. Lightly flour a flat work surface, and turn out the dough. Knead until smooth and elastic, about 5 minutes, adding more flour if the dough sticks. Put in a large greased bowl, and turn to grease the top of the dough. Cover with a kitchen towel and let rise in a warm, draft-free place until doubled in size, about 1 hour.

For the filling: Punch the dough down. Transfer to the lightly floured work surface and use a rolling pin to roll into a 30-by-9-inch rectangle. Brush with the melted butter. Combine the brown sugar and cinnamon in a small bowl. Sprinkle the brown sugar mixture over the dough to within 1/2 inch of the edges. Beginning at the long end, roll up tightly, as for a jelly roll. Pinch the seam to seal. (The baby charm will go in after baking.) Cover and let rise in a warm, draft-free place until doubled in size, about 20 to 40 minutes. Preheat the oven to 350 degrees F.

Bake for 30 minutes, or until lightly browned. Remove the cake from the baking sheet and let cool on a wire rack. Push the plastic baby figurine into the underside of the cake. (You can substitute a coin or a bean which you can place in the filling before you bake the cake.)

For the frosting: In a small bowl mix together the sugar, almond extract, and milk until smooth. Divide among three smaller bowls. Tint one mixture purple, the second one green, and the third one gold, mixing each one well. Frost as shown, alternating the colors.
Posted by Allison at 6:00 AM

What a fun story and I LOVED getting your King's Bread recipe, but a whole stick of butter? Yipes! Gonna have to pace myself on this one. :P

In the south, we love our butter.A lot of it goes in about everything we make.

Awsome Allison. Love Mardi Gras. We have a grand tradition as well here in Pensacola. And there is a king cake in the kitchen here at my office as I type this. Enjoy! Sherry

Thanks for the wonderful information. Having lived in Mobile Alabama I am so glad you cleared that up about New Orleans not being the birthplace of Mardi Gras. We only lived there two years but we did enjoy all the fun of the endless parades and the atmosphere of fun. Not a big favorite of King Cakes but I did love taking a moon pie (chocolate of course) and putting in the microwave for about a halfminute and then adding a huge scoop of vanilla ice cream, it tasted even better if you caught that moonpie yourself.

Interesting post. I was in New Orleans back in 84 during the Worlds Fair. Would love to go back during Mardi Gras.

Thanks for the King Cake recipe!