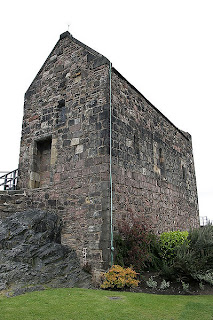 When I visited Edinburgh Castle, my favorite among all the wonderful old buildings was St. Margaret’s Chapel. It is the oldest building in Edinburgh, built in 1124 by King David in honor of his mother, Queen Margaret. The chapel is located within the Edinburgh Castle fortress on Castle Rock, an extinct volcano which hasn't been active in millions of years.
The castle was damaged or destroyed in sieges many times over the centuries. In 1314, Randolph, Earl of Moray captured the castle and destroyed all the buildings except the chapel. We can assume the chapel was damaged however, because on his deathbed a few years later, Robert the Bruce ordered the chapel be

repaired.
Because of the Protestant Reformation in the 1500s, the chapel wasn’t used for many years, except as a storage building for gunpowder. Canons are located just outside and were fired at certain times. If you stand in this area, you look out over the whole city of Edinburgh.

(To the left is a drawing of St. Margaret.) In 1853, the chapel was again restored by Queen Victoria and the five small windows adorned with stained glass. The beautiful stained glass windows we see today were installed in 1922, and further restorations were carried out over the years since. At 10 feet by 16 feet the chapel is only large enough to hold about 20 people comfortably, but it is still used for baptisms and weddings on occasion. 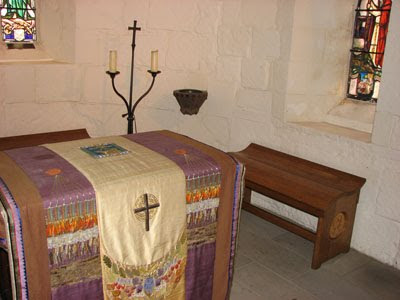 Above is the alter. The architecture of the building is Romanesque and resembles earlier Scottish and Irish Celtic chapels. The stained glass windows feature the following saints and people important in Scottish history: 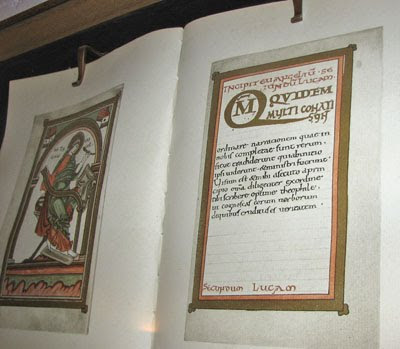 According to legend, St. Margaret's Gospel Book, richly adorned with jewels, was one day dropped into a river. The book was recovered later and miraculously without any stain or damage. This medieval manuscript, purchased for just six pounds at auction in 1887, is now held in the Bodleian library at Oxford and the above picture is a copy displayed in St. Margaret’s Chapel.

This chapel is tiny and ancient, yet incredibly beautiful. The walls are thick and it is cool inside. It has a quiet peaceful feel. To stand inside the building is to stand in the midst of medieval history, or at least as close as we can to it.
http://www.nicolenorth.com/
Posted by Nicole North at 9:47 AM

Very interesting! Thank you so much for sharing.
Tami Dee (I had to use anonymous because I can not recall my goggle password--again)

I love St. Margaret's Chapel. I always try and go there when I'm in Edinburgh. I first saw it when I went to Scotland for the first time when I was 16.

Tami, thanks!! Glad you enjoyed it!

Elizabeth, it is one of the neatest places. You can feel the history there.

What a wonderful building! Another place to add to my list of things to see in Britain when I get there. Thank you for the tour.

Leslie, thanks for checking it out! The chapel and all of Edinburgh Castle are fantastic. Hope you get to visit.

The first time I ever saw the building, a wedding was being held in it. So we had to visit every other place in the castle in hopes that it would free up so I could see the inside.

When you say twenty people, you really mean twenty people of the time. For large people, meaning rotund, it would only hold about
10-15. But the most amazing part was the fact that they made it for tall people because of William Wallace who was a reported 6'5". This made my DH happy who is 6'4" and we were incredibly amaze at how quite and reverant the place was with hundreds of people milling around outside.

It also has an amazing view as it is set up on a rock and is a little higher than some other buildings. I remember standing at the door and looking out over the walls.

Thanks for such a lovely reminder of a place I plan to return to soon.

Beautiful pictures, for a building that old it sure looks very goos.

very nice photos of this wonderful building, very interesting, love this kind of buildings, love your blog thanks for sharing..