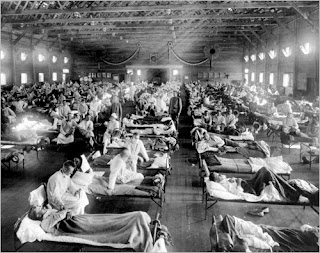 Since flu season is swooping down on us, I thought I'd write about the influenza pandemic of the 1900's. In the book It's About Time: How Long History Took Mike Flanagan writes on page 10 that the pandemic took three years and that:
"Chicago's crime rate dropped 43 percent. In one day 851 New Yorkers died. More American soldiers died of the "Spanish Flu" in 1918 than were killed on battlefields of World War I. Since epidemic bronchitis preceded the flu from 1915-1917 in France and England, few individuals had a prior immunity to this new lethal strain and often died within a week of exposure. In the United States, 500,000 deaths were recorded between March and November of 1918. Globally, about 40 million people died. Recent studies say the virus may have percolated within humans and pigs for several years until it grew lethal enough to emerge as history's worst influenza pandemic." 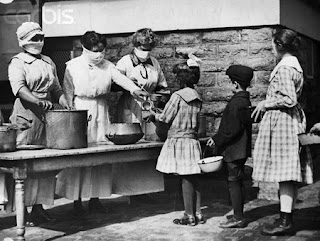 An article on the Center of Disease Control website says that over 500 million people worldwide were affected. In addition, the effects of this pandemic are not limited to 1918. Every influenza A pandemics since are descendants of the 1918 virus.
By the way, you may recall that this pandemic was mentioned in the holiday classic "It's A Wonderful Life." As an employee at the pharmacy, George Baily reads a telegram from the war department to Mr. Gower telling him his son died of the influenza. The grief of losing his son causes Mr. Gower to put poison in some medicine he's mixing.George saves the day by noticing what Mr. Gower did and not delivering the medication to the sick family. When George is 'never born,' Mr. Gower was sentenced to years in prison for killing people that day.

Additional information about the pandemic can be found out:

For a time line on the pandemic check out:

Influenza (the flu) is serious.
Each year in the United States, on average:

For more information on influenza from the CDC (Center for Disease Control) check out their website:

If you're at high risk for the flu, young, old, or chronically sick, you should get your flu shot, before the flu gets you.

PS – most of this article first appeared on my blog Chatting with Anna Kathryn on October 16, 2008.

~Anna Kathryn
www.aklanier.com
Posted by Anna Kathryn Lanier at 12:06 AM

Hi Anna,
That was interesting. Terrible that soldiers survived the war only to die of influenza.

My mother was born in the early 1920s in a small southern Indiana town. Next to hers was a little ghost town in which all the inhabitants had died during the 1918-19 influenza epidemic. She still talks about how creepy it was to pass through the place with all its empty houses and storefronts.

Hi, Margaret and Joanna. Thanks for stopping by.

I agree Margaret, for the world ro rejoice that the war was over, then have this sweep the world!

Joanna, I had not thought about the towns that would hae been emptied by the disease. I can see how it would be creepy.

One thing I didn't mention in the article is that this pandemic helped Hitler dominate Europe 20 years later. With the young male population reduced in France by the first war and then the flu, he was able to just march in and take over...there were not many young man left to rise an army against him.

Oh, another note I learned in history class - both Germany and France had a shortage of men right after 1919 due to the war and the flu. But Germany didn't frown upon unmarried women as much as France did, so more illegitimate children were born in Germany over the next 15-20 years, giving Germany a higher 'younger' poplulation and able to raise a larger army. So, as I said above, this flu helped give Hitler take over Europe.

I love informative posts like this! Always gives me an idea for a story and the ghost town due to the flu epidemic is priceless! Race you to write it!
Liz Arnold
Message to Love
The Wild Rose Press

Can you imagine the fear of getting the flu? I'm surprised at the statistic of how many continue to die from the flu.

It's interesting to see another person write about the 1918 flu problem. I actually did this same research about 3 years ago when there was concern about a possible avian flu epidemic in today's world, when I was writing for a local newspaper. Nice job researching and presenting.

I've used this historical period in several pieces I've done. There are so many stories there!

Hi, Liz, Sally and Katie. Thanks for stopping by. It' scary to think of how many people died of diseases that can now be cured. And I agree, Sally. It's suprising how many people still die of it, especially when there are shots availeable to help prevent the disease or spread of it. Like the other vaccines we have to prevent whooping cough (making a comeback), measles, polio, which some people are not getting. I think problem is, people don't remember what it was like, don't know someone who had polio or measles.

I am thinking of doing another blog on this, researching the start of the flu, which I think started in the US, not Spain.

I was just doing research earlier today and came across a photo from Boston City Hospital showing patients recovering from the flu pandemic of 1918. Interesting to find your blog right after.

The Great Influenza by John Barry is a fascinating, in-depth look at this. I highly recommend it.

Does anyone know of another famous character in a book, now a movie, that got his start in his new life from the 1918/19 flu pandemic?

Edward! From the Twilight Saga. Which is why he's so old-fashioned in the way he treats Bella.

As an RN I got the flu shot every year and hounded my parents, especially my dad to get it. It took several years but now he gets his flu and pneumonia shots.

My dad had a bad case of scarlet fever when he was a youngster. It caused him to develop a severe heart murmur. He's a higher risk for infections.

Everyone should get the flu shot but anyone with a compromised immune system should run to get the shot.

I do so love your history posts!

One thing I'm wondering - the recent "pandemic" had more of a tendency to kill younger people rather than older, which I gather was unusual. But from your commentary, it sounds as though this may have been true in 1918-1919 as well.