The Legend of the Kelpie 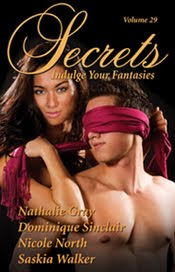 My latest story Beast in a Kilt was released last week in Secrets Volume 29 Indulge Your Fantasies. It is a paranormal historical erotic romance. The hero in this story is a special type of shapeshifter-- a kelpie.
Kelpies are a part of Scottish folklore and legend. Centuries ago, Scots believed certain lochs or rivers were inhabited by these malicious water demons. A kelpie appears to be a normal-looking, beautiful white (or black) horse. This creature charms and lures weary travelers onto his back and then dives into the loch or river, drowning and eating his victims. Kelpies have the strength and stamina 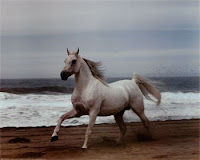 of ten horses. And some legends say these kelpies could shift into gorgeous human males if they wanted. In this form they sometimes seduced women.

Of course Torr Blackburn, the hero of my story, doesn't drown people or eat them, but he does shift into a beautiful white "horse" at night and feels an intense, violent rage at times. When he's hungry, he eats grass or oats like a normal horse. He loves swimming in the nearby loch to burn off energy or aggression, and he never feels cold, even in midwinter. In kelpie form, he does, as legend says, have the strength of ten horses; he can run all night if required. (I used this picture of Gerry Butler as Attila as inspiration for Torr. Yes, he does like to smirk. ;-) ) 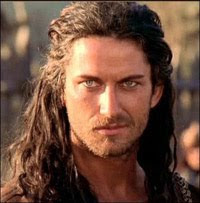 Traditionally, the only way to capture a kelpie is with a magical bridle. If a person can manage to place this special bridle over his head, the kelpie is enslaved. And that's exactly what the witch of the dark arts does at one point--the witch who cursed him in the first place. The only way he can escape the curse is to find true love.

I thoroughly enjoy researching and creating paranormal stories, whether they are shapeshifter, time travel or magical. I can let my imagination fly free and ignore the restraints of everyday rationality and logic. Paranormal romance is pure escape and fantasy, yet still believable.

When I visited Scotland, I saw this sculpture called The Kelpies at the Falkirk Wheel.
I created this paranormal world in my first novella in this series, Devil in a Kilt, Red Sage Secrets Volume 27 Untamed Pleasures. The novellas take place in the year 1621 in Scotland. A dark witch placed a curse on three men who are friends and Highlanders (Gavin, Torr and Brodie) the year before because her son was killed in a skirmish in which he and his friends were trying to ambush and kill our three heroes. The witch took her revenge by placing a different curse on each of the three heroes. Gavin, the Highland chief from Devil in a Kilt, shapeshifts into a hawk. Only one thing will break the curse for each man, love given and received, in equal parts with complete trust. I've recently sold the third story in this series, Scoundrel in a Kilt for a future Secrets volume. The 3rd friend, Brodie, shapeshifts into a selkie. More on that Scottish legend later. :) 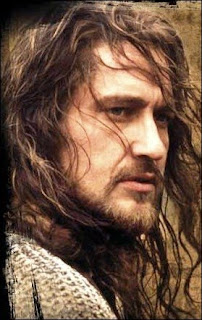 Here's the blurb for Beast in a Kilt:
Scottish lady Catriona MacCain has loved Torr Blackburn, a fierce Highland warrior, since she was a young lass, but Torr only sees Catriona as his best friend’s little sister. When Catriona’s family promises her in marriage to a detestable chieftain, she desperately needs Torr to save her from a fate worse than death. But Torr is under the spell of a witch of the dark arts and is cursed to spend his nights as a kelpie water demon. He doesn’t believe himself worthy of the virginal Lady Catriona. However, she is determined to seduce Torr and claim him… body, heart and soul, if only they can banish the curse and defeat the enemies who have vowed to possess and enslave them both.
What is your favorite legend, Scottish or otherwise?
Nicole
http://www.nicolenorth.com/
Posted by Nicole North at 9:36 AM

Thanks Miriam!! Gerard Butler pics can dress up any blog post. :)

How interesting! I'm sending the link to my granddaughter (age: 16) who loves mythology and lure. I doubt she's ever heard of this. She'll think I'm so kewl...thanks for my "kewlness quotient" of the day. Write on!!

This book does sound really good...I would Love To read it :D

You are an instructor in more than just writing! That was very interesting about Kelpies. I had no idea.

Of course, you already know what I think of the pics. =)

This was a very interesting post, well done! I love the pics of Gerard butler, especially the first one. Thanks for sharing. I have become a follower and will post this link on my blog site, www.heart-of-romance.blogspot.com.

Thanks for sharing info about the Kelpie. It's a very interesting legend. Your hero, Torr, sounds yummy - just like Gerard Butler. ;)

Vonnie, thanks! Hope she enjoys researching kelpies! They are definitely kewl creatures. :)

MoonDance, thanks!! Hope you enjoy it!!

Casey, thanks! Glad you enjoyed the kelpie info! I had a feeling you might like the pics. You would be so jealous of this pillow I won with his picture on it! Talk about sweet dreams. :)

Sarah, thanks!! Gerry is very inspiring. I'd just like to hear his native Scottish accent more.

Thanks Jena!! I think he's yummy but I'm a bit biased. LOL

I love Beowulf and Grendel and not only because Beowulf is one of the most gorgeous men alive (really, I swear) but because he has hair everywhere. Yummy Scot playing the part of a Swede. I am half Nordic so maybe that is the real reason, but probably not. If this doesn't make sense, it's because I didn't sleep much at National and the best part about that is we had Gerry photos all over the room, including the ceiling. The made came in and said our room was her favorite one to clean!

Seriously I loved this story/myth since I read it in school. Who would have figured it would be displayed so beautifully.

That yummy Scot does a great job in any role he plays! :) I can see why you didn't sleep at national if Gerry was everywhere in your room. ;) It was wonderful meeting you!!

Love the pics! I have the same in a file as a portrait of the hawt Scottish hero of one of my WIPs as well. Oh, the man fits the role so well!

As for a favorite legend, there are so many! The Kelpie is probably one of the most interesting, so I'm looking forward to reading your story.

I love any story woven from the old myths and tales. You can't beat them! Great pix, as always, Nicole. Good luck with your "Beast!"

Gabriella, it's a sexy, inspiring photo of him!! I love that smirk that says, "don't mess with me or I'll kill you." :)
Hope you enjoy the story!

Pat, I've become addicted to old myths and legends! Thanks!!