The Pen Is Mightier Than the Sword(And Just As Old, Too).

I’ve always had an interest in the pen. In junior high school, I started studying calligraphy and my best Christmas present one year was a beginners set of calligraphy pens. Over the next few years, I spent my allowance buying dozens of different pen nibs (the part that does the actual writing in calligraphy), special calligraphy paper and inks.


As I was writing my debut release, Widow’s Peak, someone told me that the word “pen” was anachronistic to the middle ages. That made me wonder about the history of pens as writing implements.

Historically, pens seem to fall into three main categories, quill pens, reed pens, and dip pens. Quill, or feather pens seem to be the first recorded use of a pen. Texts mention use of bird feathers for writing on the Indian subcontinent in about 5000 BC. They were the pen of choice in Western culture until the end of the 19th century. 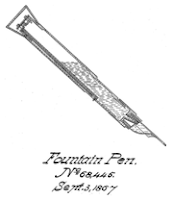 The earliest known fountain pen dates back to 10th century when a caliph demanded a pen that would not stain his hands or clothing. A reservoir pen was devised that served the caliph’s needs. In 1827, a student studying in Paris, reinvented the fountain pen and the French government immediately patented the new device. By the 1850’s, several other fountain pen patents had been filed and the first mass produced pens began to appear. However, the quill pen was still the pen of choice until nearly 1880.

The first patent on a ballpoint pen was issued in 1888. In 1938, the Biro brothers designed a pen with a free rolling ball tip that distributed ink evenly and gave a uniform writing line with minimal skipping and blotching. World War II pilots popularized the use of the ballpoint pen and it remained the pen of choice well into the seventies.