Women of the West

WOMEN'S DIARIES OF THE WESTWARD JOURNEY, by Lillian Schlissel, relates letters, diaries and the lives of dozens of women who traveled the Overland Trail during the 19th 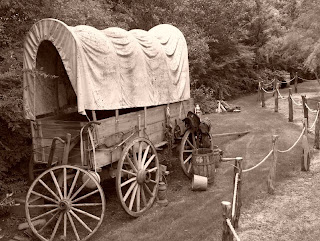 century. While the men of this major American migration saw the 2,500 mile trip as an adventure and a way to start up a new life, women saw it as “a leaving behind”—family, friends and as Margaret Wilson wrote, “my children buried in...graveyards.” (pg. 28) The women knew they were leaving stable communities and “domestic circles” for the unknown.

What the women discovered, however, was that necessity really was the mother of invention. Within weeks, if not days, after hitting the trail, women found a new circle of support within the female society of the wagon train. They banded together for the common good to move the train along its rocky and uncertain path to the hoped for happy journey's end.

In the 1800's, a woman's place was home—hearth, children, kitchen. This did not change just because home was now a rolling wagon. A woman continued to do the cooking, baking, washing and tending to the sick and children. Only now, the cooking and baking were done over an open fire, in the rain with wet wood or cow chips gathered while walking the day's miles. The washing was done on river banks with cold water and harsh soaps. The children had more adventures and scrapes to be wary of, but often suffered from neglect, because the mothers “carried more than their normal share of care and work.” (pg. 49)

Women had different routines than men. They rose earlier, worked harder and stayed up up later. They did their own jobs and also helped the men with theirs. Martha Morrison wrote, “The women helped pitch tents, helped unload [the wagons] and helped yoke the oxen.”(pg. 35) They also drove the oxen and wagon and herded the sheep and cattle as well.

The work, no matter how unusual to them, soon became routine and repetitious to the women. The mundane work, however, gave a sense of regularity and predictability that could ward off the unexpected dislocations of the road. (pg 102). It helped them to overcome the hardships they endured— the sickness, the deaths, the lost possessions. It helped the women get through one step, one mile, one day at a time. It helped them reach their journey's end.

I think we often romanticize the days of Western immigration. We don't think about the hardships, the hard work, the hard life. Of course, this is true in any time period. We don't discuss the smells, the dirt, the everyone sleeping in the same room.

What is a historical fact of life that you think is best left out of romance novels? I guess in my Wagon Train story, the dirtiness of the characters would have to be it. I mean, how can they be getting romantic when neither one has bathed for days?

Leave a comment and you'll be elegible for a copy of Suzanne Enoch's BEFORE THE SCANDAL.

What wonderful info, Anne! I guess that bath does come in handy in romances. It's interesting that so few mainstream romance authors are able to protray some things that are so readily seen in Christian romances. It's also interesting that the men we want to think of as heros would allow their women to work harder than them. My uncle never let my aunt clean the bathroom or the floors in 43 years of marriage.... They just don't make 'em like that any more.
Best of success to you!

Thank you for an informative post. The hardships of history are often overlooked. The thought of someone who hasn't bathed or changed clothes for months which was not uncommon for trappers is not a very pleasant one.
I think the TV mini-series INTO THE WEST did the best job I've seen of depicting what the westward expansion was really like for all concerned. In many cases it wasn't pretty and was often heartbreaking. It took more than many had and brought out both the best and the worst in people.
librarypat@comcast.net

Great post, Anne. Everything you touched upon is so true. I know that because my husband's grandmother walked one of those trails to Nebraska when she was a child, one of six in the family.

She talked about burying one of her sisters, Alice, on the trail. It was so very hard not only for her mother but the rest of the family to walk away and leave the pitifully small child in a lonely grave on the prairie.

Grandma always grumbled when we watched the old Wagon Train TV show. "Wasn't like that at all," she'd say. "The Indians we saw were hungry and wanted food. They didn't attack us, not once."
She died in 1967 at age 93.

I've always considered myself fortunate to have witnessed the last half of the 1800's through the eyes and words of my own relatives and Grandma M.

Btw, Mary, they still "make them like that." My dh always cleans the bathrooms, washings the windows, and used to do the floors until we started hiring a lady to come in regularly and clean.

Do people really think women's roles changed between sedentary and mobile homes? I'm always shocked how most people don't realize refrigerators haven't been around that long. LOL. You know, I bet a man loved heading West with a wagon. He got to drive, hold the reins, or just ride out front while his wife kept up with their belongings by driving the wagon... Okay, okay. He probably farted around hunting. After all, anthropological studies show hunters only bring something back 25% of the time. Can you imagine how much the wife had to keep things on track (literally and metaphorically)? Women were definitely the hearth of the home...

Librarypat talked about bathing. In 1902, people washed their hair once a month in the States. That's a fact! Can you imagine? Of course, cleanliness is relative... :)

It does make for a better book(love scene) when the two characters are clean. LOL

I agree, the women were worked to death and expected not to complain. I imagine if you don't know any different, you believe this is what life is about. As much as I'd love to have been in that era, another part of me is thankful I wasn't.

What a great post! I will have to agree with you on the bath thing. It something we don't need to be reminded of. I mean lets face it if they are on the trail for months you already know they can't do laundry and take a bath daily. I couldn't imagine going without a bath but they did what they had to do to servive. Men would work the women hard taking care of things. I'm not saying men didn't work hard but they put a lot off on the women, hey they still do this today. So some things still haven't changed.

I love these kinds of blogs I love to learn about the history of what women did to survive settling the continent. Amazing women.

I can't imagine the hardships for all involved. I'm happy to not have been a part of that era but love to read about it; thanks for the info. The one goal was to arrive at their destination.

The uncleanliness is a part of their life but I agree that it is best to be left out of the story.

Oh, I read this book years ago and absolutely loved it! Really the first time I had stories of the West from a woman's perspective. An eye-opener for sure! Thanks for sharing.

Terrific post Anna, so informative, they were certainly women of great fortitude. About bathing or lack thereof, if everyone else stunk you wouldn't notice how whiffy you were yourself.

Congratulations to RobinL, she won my daily drawing for Suzanne Enoch's book. Thanks to everyone for stopping by.

wonderful news; thanks so much for the win and e-mail on it's way.